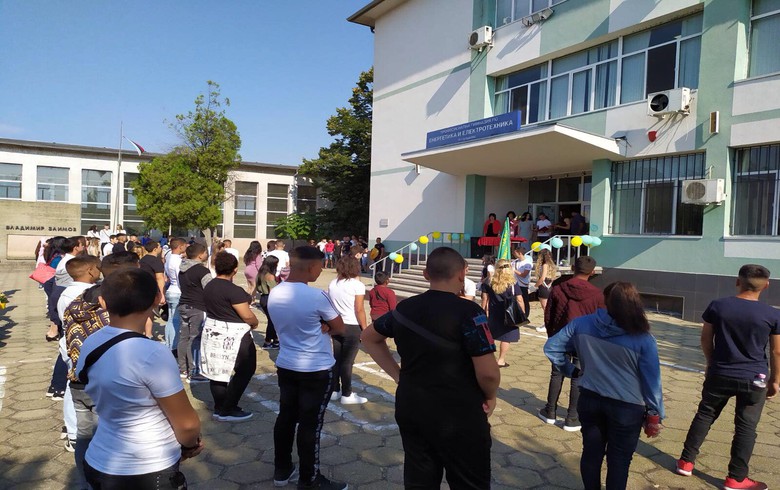 For the fifth consecutive year, the Fulbright program and ContourGlobal Maritsa East 3 TPP deliver high-level education to the children in the town

From the beginning of the new school year, students from the Vocational School of Energy and Electrical Engineering in Galabovo, in the heart of the energy complex Maritsa East, will again have the opportunity to study English taught by a native speaker. After a pause due to the pandemic, a new teacher from the United States arrived in the town under the Fulbright program with the support of one of the largest power plants in the region - ContourGlobal Maritsa East 3 TPP.

The new English language ambassador in Galabovo is Amanda Adinolfi, from Staten Island, a suburb of New York, USA. She is 23 years old and has a degree in International Relations. Amanda has experience as part of the Peace Corps and has taught English in Ukraine. ‘Being a teacher in a foreign country is an adventure and an opportunity. What I do is much that more than just teach a foreign language, because language becomes a cultural bridge for exchange of values and perceptions of the world, gathered in a human conversation’, says Amanda Adinolfi.

The Fulbright program enables young people in our country to study English with teachers from the United States. Until recently, working with a native speaker was a privilege only for the big cities and the specialized language and science high schools in the country. Five years ago, ContourGlobal Maritsa East 3 TPP became the first corporate partner of the program in Bulgaria, making this opportunity possible in the town of Galabovo, too.

‘We are glad that this partnership has opened new horizons for the children in the town. We also proved that good example is contagious - thanks to corporate sponsorship, an assistant teacher from the Fulbright program is now available at the vocational school in the town of Panagyurishte. This is a sign that the energy we give to quality education in our country charges even more young people. From the feedback from the schools it is clear that the program has a positive impact on both the success of children and their attitude to the learning process in general. This outcome is worth all our efforts’, says Nevena Dimitrova, Communications and CSR Specialist at ContourGlobal Maritsa East 3.

Although the American Fulbright teachers have a one-year term, former teacher Keegan Scott remained in Galabovo for three years - a precedent for the program. He arrived in 2017 and remained in Bulgaria until March 2020, when he returned to the United States due to the pandemic. Keegan used his stay for much more than just teaching - he studied Bulgarian, joined folk dance groups, participated with his students in national debate competitions, staged The Wizard of Oz and Cinderella in English, taught in one of the primary schools in Galabovo... For all this, he was awarded a special medal of merit from the Ministry of Education and Science.

‘Everyone liked the idea of learning a foreign language in extra classes and with an English-speaking teacher. We started with a trial period, and during the first year of working with the American teacher, this method of learning English became a favorite pastime – inside the classroom and outside, for students and their families. We thank ContourGlobal for their initiative and desire to benefit the local community and provide this opportunity for the children from our small town to be exposed to this new method of learning’, says Petronka Tsvetkovska, Director of the Vocational School of Energy and Electrical Engineering.

With the advent of the new school year, the Vocational School of Energy and Electrical Engineering in Galabovo is looking forward to meeting Amanda: with creative ideas for fellow teachers and new adventures in English for students and the community.