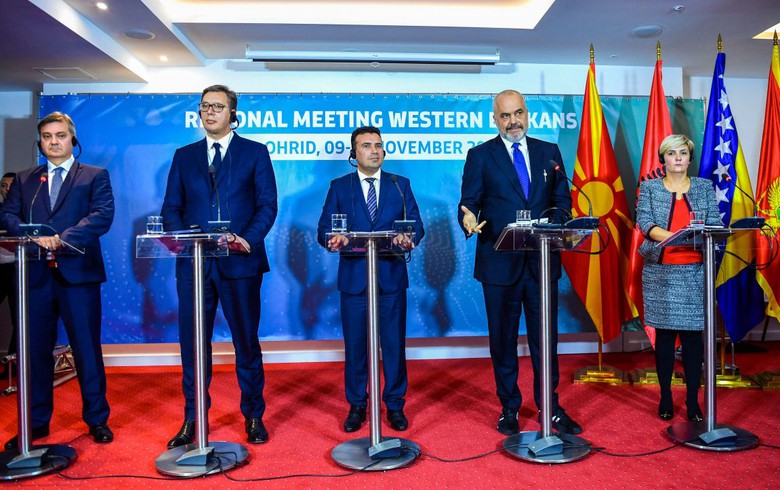 SKOPJE (North Macedonia), November 11 (SeeNews) – The leaders of North Macedonia, Albania and Serbia have agreed on steps towards implementing a joint initiative to facilitate the free flow of people, goods, services and capital among their countries, North Macedonia's prime minister said.

The measures include free movement of citizens, possibility for foreigners to travel without additional visas, joint work permits and recognition of qualifications without additional procedures, as well as reduction of waiting time at border crossings, North Macedonia’s prime minister Zoran Zaev said in a statement on Sunday, after a meeting in Ohrid with his Albanian counterpart Edi Rama, Serbia’s president Aleksandar Vucic, Bosnia's prime minister Denis Zvizdic and Montenegro's economy minister Dragica Sekulic.

According to Zaev, the measures also include a joint set of documentation needed for the transit of goods, amendments to the laws regulating the capital market, tax and financial systems in the three countries in order to create conditions for a smooth flow of capital, further strengthening of cross-border co-operation to combat transnational crime and terrorism, exchange of students, as well as joint research and development projects.

The measures will be further defined in an action plan that will be drafted by the next meeting of the initiative in Durres, Albania at the end of December, Zaev noted.

The initiative is open to all Western Balkan countries, Albanian PM Edi Rama said in a separate statement, adding that Kosovo should join the initiative.

Kosovo’s president Hashim Thaci said on Sunday that the initiative is meaningless as long as Serbia and Bosnia do not recognize Kosovo's independence. Kosovo does not want to exchange its Euro-Atlantic perspective for a regional one, Thaci said in a Facebook post.