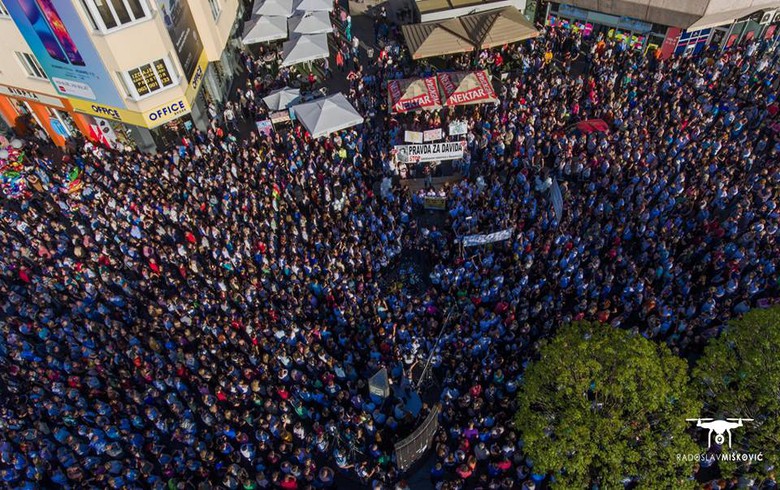 BANJA LUKA (Bosnia and Herzegovina), April 23 (SeeNews) – Thousands of people from all corners of Bosnia and Herzegovina gathered on Saturday in the city of Banja Luka following the death of a local youth with demands that the police put an end to unsolved murders and corruption among its ranks, a SeeNews reporter saw.

The protest was prompted by the recent death of 21-year old David Dragicevic, who disappeared in the early hours of March 18, in Banja Luka, after leaving his home a day earlier to meet friends. His body was found a week later in the shallow waters of the Crkvena river in the very centre of the city.

Two days later the police held a press conference announcing David's death was an accidental drowning, but admitted that an autopsy has revealed numerous bruises suggesting a physical altercation occurred prior to his death. A number of inconsistencies in the statements made by the officials at the conference and the findings of a second autopsy which pointed to a different time of death have cast doubt about the work of the police and have sparked street protests.

The District Public Prosecutor's Office in Banja Luka is currently running an investigation into the circumstances surrounding David's death but the public doubts their impartiality.

Since March 26, citizens of Banja Luka have been gathering daily in the town square, demanding that the police do its job, find David's murderers and put an end to unsolved killings. They have been supported by people living in Sarajevo and other cities in Bosnia and Herzegovina, as well as the ex-Yugoslav community abroad.

In its latest report on human rights in Bosnia and Herzegovina in 2017, the US Department of State points out that public safety is marred by many human rights issues.

Among them the most prevalent issues are restrictions on expression and the press, widespread government corruption, and crimes involving violence against minorities and LGBTI persons, the report said.

The report reveals that the public views corruption as endemic in the public sphere, with police impunity widespread in the country and continued reports of corruption within the state and entity security services.

The report further points out that the justice system is plagued by the fact that political parties and organised crime figures sometimes influenced the judiciary at both the state and entity levels.

The US State Department also found that the government failed to comply with many decisions pertaining to human rights by the country’s courts.

"The court system suffered from large backlogs of cases and the lack of an effective mechanism to enforce court orders. Inefficiency in the courts undermined the rule of law by making recourse to civil judgments less effective," it said.

Moreover, it added, that the government fails to effectively implement the law on criminal penalties for corruption by officials, judging that it does not prioritize public corruption as a serious problem, with officials frequently engaging in corrupt practices with impunity.

Restrictions on expression and the press, including intimidation, and threats against journalists and media outlets are also prevalent in Bosnia and Herzegovina, the State Department cautioned.

"Intimidation, harassment, and threats against journalists and media outlets continued with the same intensity as in prior years, while the majority of media coverage was dominated by ethnic and political bias, often encouraging intolerance," it pointed out.

It noted that absence of transparency in media ownership also remains a problem, with the government of the Serb Republic continuously controlling broadcaster RTRS and using it for promotion of the entity's political establishment, while undercutting political opposition.

Bosnia and Herzegovina is made up of two entities - the Serb Republic and the Federation - as well as the Brcko District, an autonomous administrative unit under the country's sovereignty.