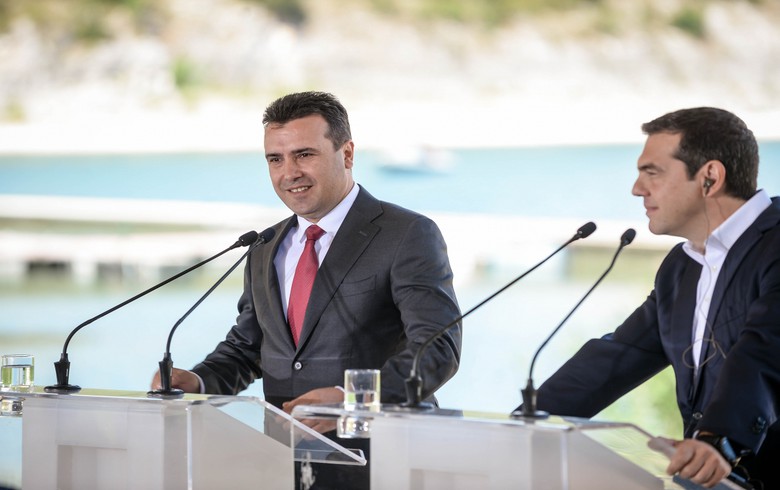 SKOPJE (Macedonia), June 18 (SeeNews) - The foreign ministers of Macedonia and Greece Nikola Dimitrov and Nikos Kotzias signed an agreement to end the long-running dispute between the two countries, paving the way for the former Yugoslav republic to join NATO and the European Union under its new name of North Macedonia.

The signing ceremony took place in the presence of Macedonian prime minister Zoran Zaev, his Greek counterpart Alexis Tsipras and senior representatives of the European Commission sparked public protests  in both Macedonia and Greece.

"Today we are ending the dispute. We are putting an end to the many years of differences which have hindered friendly relations between neighbours," Zoran Zaev said during the ceremony which took place in the village of Psarades, on the Greek side of the border between the two countries on Sunday.

The solution to the name dispute opens the door for the EU summit on June 28-29 to decide to launch accession talks with the Republic of North Macedonia, and for the NATO summit on July 11-12 to extend a membership invitation to Skopje.

Last week, Macedonian president Gjorge Ivanov said he would not support or sign off on the agreement, which according to him  violates Macedonia's constitution and is harmful to the interests of his country.

To go into force, the agreement should be ratified by the parliaments of both countries. In addition, Macedonia will also hold a referendum on the deal in the autumn of 2018, Zaev said last week.

Right after the ratification, Greece will send a letter to the NATO secretary general, informing him that there is no dispute between both countries and that there are no obstacles for Macedonia to receive an invitation for NATO membership, Zaev said in a statement. Greece will also send a letter to the president of the European Council, informing him that there are no disputes and recommending that Macedonia gets a date for start of EU membership talks.

Athens has blocked Macedonia’s attempts to join NATO and the EU over its 27-year row with Skopje over the name of the former Yugoslav republic. which according to Greece allegedly implies territorial clams on the Greek northernmost province of the same name.