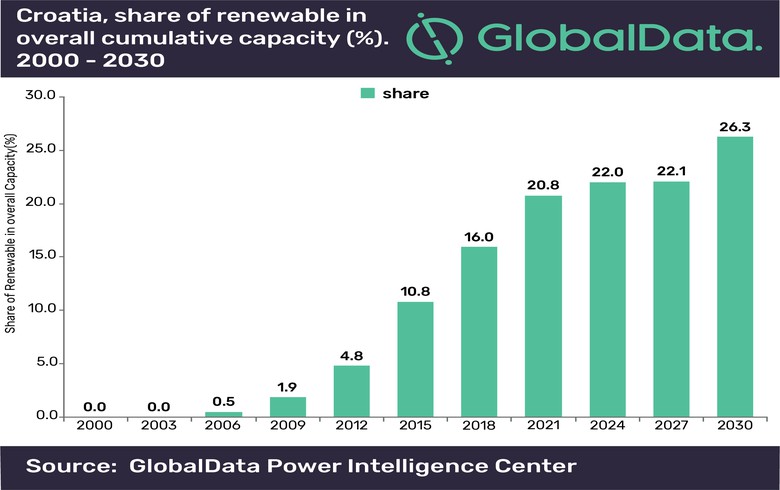 ZAGREB (Croatia), November 26 (SeeNews) - Croatia's renewable energy capacities are expected to reach 1.9 GW by 2030, in line with the government's strategy to raise the share of green energy to 36.4% of the country's total energy consumption by the same year, data analysis and consultancy firm GlobalData said.

Croatia's wind power will see the maximum growth among the renewable energy sources in the review period, with wind capacities expected to rise to 1.4 GW in 2030 from 625 MW in 2018, GlobalData said in a report on Monday.

"Croatia’s large-scale untapped renewable sector, with around 8-9 GW potential for wind and solar, has opened new opportunities for market players. The south-western region of Croatia receives a good amount of solar irradiation," power industry analyst at GlobalData, Utsha Ghosh, said in the statement.

"Furthermore, the prominent wind resources in the south, south-west coastal region comprise significant wind potential to meet the country’s renewable energy target. The country also has huge potential for geothermal energy in the Northern part of the country, which could be used both for electricity generation and heating," Ghosh added.

Moreover, the rising volume of renewable energy capacities will make Croatia reduce the share of imports to 44% in the country's total consumption by 2030 from current 62.5%, GlobalData said.

In late October, the government in Zagreb adopted a renewable energy strategy for the next ten years, saying the share of green energy in its total energy consumption will climb to 36.4% by 2030, and could increase further to 65.6% by 2050, according to the most ambitious scenario.

Energy minister Tomislav Coric has said this will be achieved thanks to significant investment in improving the energy efficiency of residential buildings, as well as via investment in new renewable energy production capacities, with most of them planned to use the power of the sun and the wind.