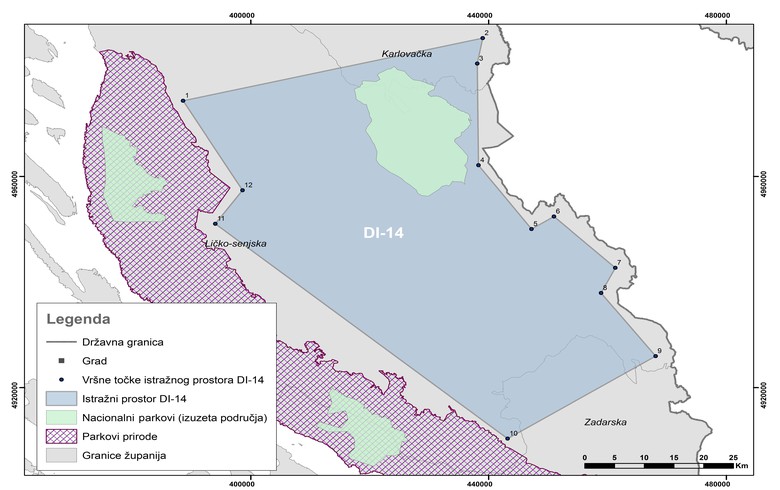 DI-14 block of Croatia's tender for oil and gas exploration and exploitation in the Dinarides area, Photo: CHA

INA has received permission to carry out exploration and exploitation activities in the DI-14 block in the Dinarides, which covers an area of 2,698 square kilometres, the government said in a statement on Thursday after a regular meeting.

It added that it has also given its approval to INA to proceed with the second exploration phase at the DR (Drava) 2 exploration block in the Podravina area (along the Drava river), in line with its contract signed with the government back in 2016.

In February Croatia opened its third onshore oil and gas exploration tender, offering interested candidates to compete for four exploration areas covering a total area of 12,000 square kilometres, including the one for which INA received a licence on Thursday.

In September, the Croatian Hydrocarbon Agency (CHA) said only one bidder participated in the tender, applying for only one of the four offered blocks - the DI-14 exploration block, which comprises almost the complete area of the western Lika-Senj county, along with parts of the Zadar and Karlovac counties.

The Dinarides, or the Dinaric Alps, are a mountain range in Southern and Southeastern Europe, stretching from Italy through Slovenia, Croatia, Bosnia, Serbia, Montenegro, Kosovo to Albania, and separating the Balkan Peninsula from the Adriatic Sea.

Back in 2016, the Croatian government approved awarding six licenses to three companies, including INA, Nigerian-based Oando and Canadian-based energy group Vermilion, to explore for oil and gas in the northern Drava river basin and in the country’s east.