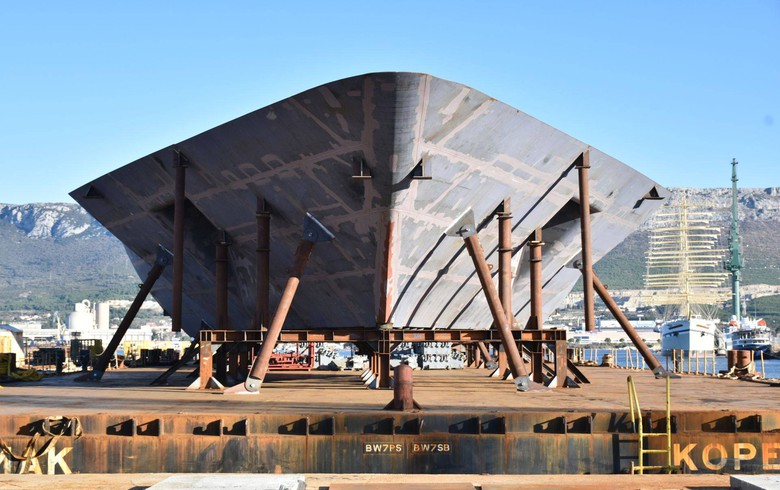 ZAGREB (Croatia), February 17 (SeeNews) - Croatian shipbuilding company Brodosplit said it has completed two cruise ship mega sections for its Italian peer Fincantieri and dispatched them for delivery to the buyer.

The combined weight of the hull sections tops 540 tonnes of steel, equipped with pipelines, communications, connections and anchors, power and automation passageways, hatchways and boxports, Brodosplit said in a statement in the weekend.

The sections will be installed at Fincantieri's passenger ship that is being built in Marghera near Venice, the statement reads.

Brodosplit said it has so far delivered more than 12,000 tonnes of cruise ship mega sections to Fincantieri, as part of their long-term cooperation.

Brodosplit (Brodogradjevna Industrija Split) is part of Croatia's DIV Grupa. Some 80% of its output is built for foreign buyers.

In January, DIV signed an agreement to acquire Norwegian shipyard Kleven Verft, planning to create positive synergies in all segments between Brodosplit and Kleven, including the design and construction of hulls and equipment, thus lowering construction and financing costs, and raising profitability, DIV Grupa's owner and CEO, Tomas Debeljak, has said.

DIV Group is an affiliation  of up to 55 companies involved in shipbuilding, steel structure solutions, diesel and LNG-powered engine manufacturing, casting, railway infrastructure, and custom design mechanical parts, among others. It employs more than 3,000 people in 30 countries across the world.