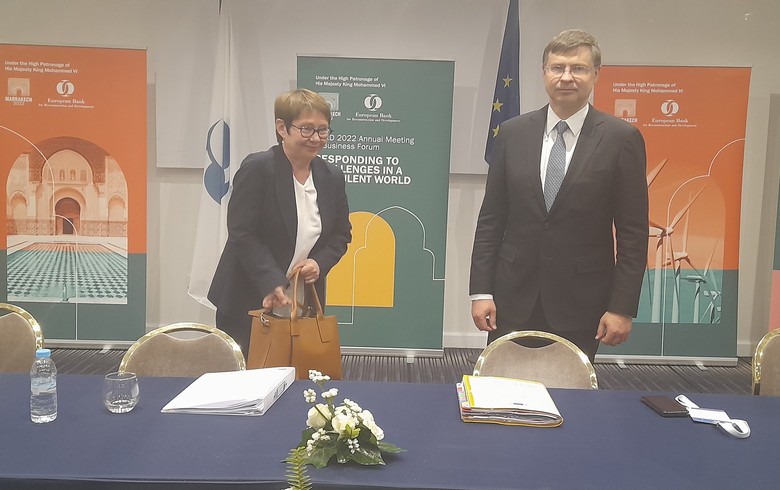 SOFIA (Bulgaria), May 11 (SeeNews) - EU Commissioner for Trade and Executive Vice President Valdis Dombrovskis said he hopes that an agreement will be reached on the sixth package of EU sanctions against Russia, including a ban on oil, to which Bulgaria and several other EU member states are opposed.

"With the first five packages [of sanctions against Russia] not all the decisions were taken immediately [...] but at the end of the day all member states were able to agree and we do hope that this is going to be the case now," Dombrovskis said on Tuesday in response to a SeeNews question during a news briefing on the sidelines of the EBRD annual meeting in Marrakech, Morocco.

"By putting sanctions on hydrocarbons, we are really getting to the heart of Kremlin's war machine financing," he added.

Last week, the European Commission proposed to phase out Russian crude oil imports within six months and extend the ban to refined products by the end of 2022, as part of an upcoming sixth round of economic and individual sanctions against Russia in response to its invasion of Ukraine. The proposal needs approval by all 27 member states to take effect.

Bulgaria, along with Hungary, Slovakia and the Czech Republic, have indicated that they would not back a potential oil embargo, with Bulgarian finance minister Assen Vassilev telling local media that the country will strive to seek an exemption.

European Commission President Ursula Von der Leyen said in a social media post on Monday that talks with Hungarian prime minister Viktor Orban have yielded some progress in clarifying issues on sanctions and energy security, but that "further work is needed."

In early April, the EU adopted its fifth package of sanctions against Russia, banning imports of coal and other solid fossil fuels from Russia and closing EU ports to Russian ships.