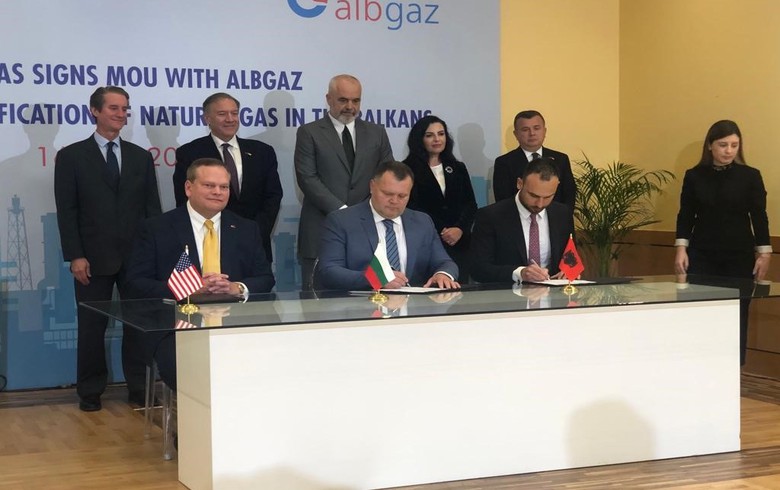 SOFIA (Bulgaria), May 17 (SeeNews) - Albanian state-owned natural gas supplier Albgaz and Bulgarian privately-owned Overgas Inc signed a memorandum of understanding (MoU) to collaborate on the future diversification of gas supply in the Balkans, with the aim of reducing the region's dependence on Russia, Overgas said.

The agreement outlines the parameters of the companies' potential cooperation on regional private sector energy projects, including the potential access of Overgas to gas projects such as LNG Vlora, Overgas said in a statement on Monday.

"This project marks the first step in a private-led effort, strongly supported by the Albanian and US governments, to create a new energy corridor that could help all Balkan countries, as well as the Balkans, Ukraine and Moldova, reduce its dependence on Russian natural gas," Overgas board member and former US ambassador to Azerbaijan Matthew Bryza said.

LNG Vlora is the planned liquefied natural gas import terminal in southern Albania, for the development of which Albgaz last year agreed a feasibility study together with US energy major ExxonMobil and US LNG company Excelerate Energy. Later in 2021, the Albanian gas grid operator also agreed to explore the construction of a natural gas pipeline from Vlora, together with Excelerate Energy and Italian energy infrastructure company Snam.

The Bulgarian and Albanian companies signed the MoU in Tirana, joined by a representative of US Linden Energy, which is acquiring a 50% stake in Overgas subject to approval by the Bulgarian government.

Linden Energy owns 10% of the capacity of the Greece-Bulgaria gas interconnector (IGB), which is close to being completed.