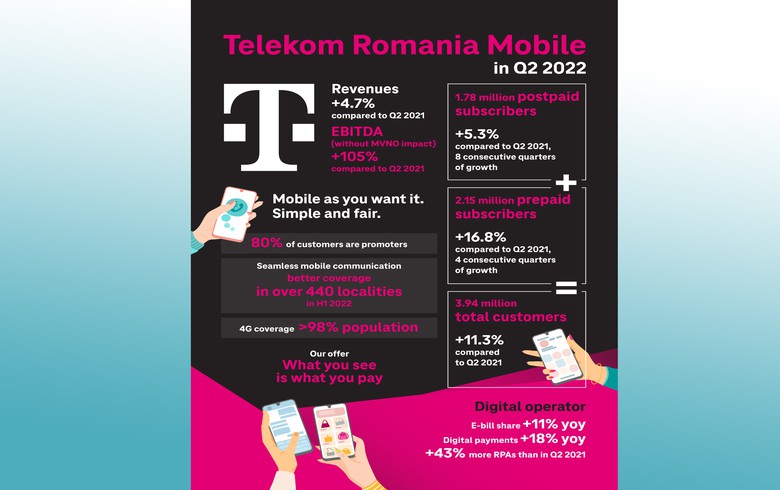 BUCHAREST (Romania), August 4 (SeeNews) - Telekom Romania Mobile, an indirect subsidiary of Deutsche Telekom, said on Thursday its EBITDA (Earnings Before Interest, Taxes, Depreciation, and Amortisation) soared 165% year-on-year in the first half of 2022, to 25.4 million euro ($25.9 million).

Revenues rose by an annual 3.1% to 156.6 million euro during January-June, Telekom Romania Mobile said in a press release.

"We are still in uncertain times. The second quarter of the year saw a rise in inflation rates, which reached 15% in June 2022, putting pressure on customers and businesses. Moreover, the increase in Covid cases during the last weeks means that we still have to fight this pandemic. Good news came at the end of the first quarter of the year, as GDP rose by 6.5% year-on-year, and I am sure that Romania will manage to pass these obstacles and maintain economic growth," Telekom Mobile Romania chief financial officer Nicolas Mahler said.

"In this environment, we have continued our efforts in implementing smart, agile and digital processes, to increase operational efficiency and customer satisfaction. We see that this is really paying off not only in reducing operational costs but also in improving customer feedback."