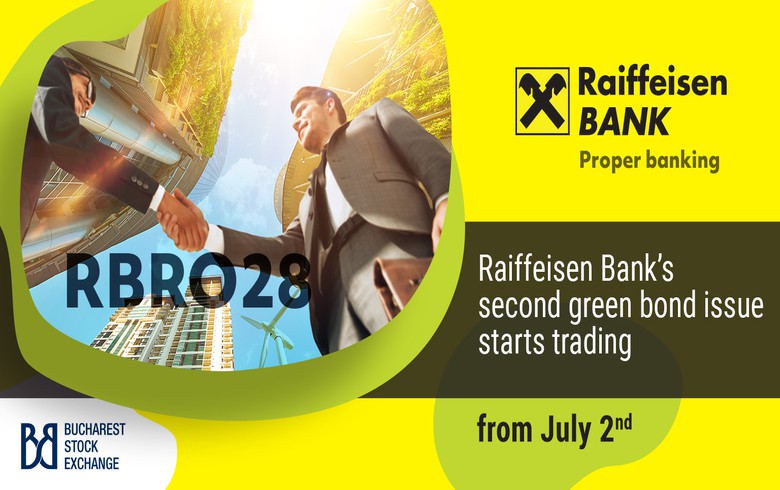 The bonds are traded under the ticker RBRO28, the bourse said in a press release.

In June, Raiffeisen Bank raised over 1.2 billion lei ($288 million/ 244 million euro), placing the largest corporate bond issue in lei by an issuer in Romania and the first non-preferential senior bond issue of the bank. The bonds have a 7-year maturity, with a fixed annual coupon of 3,793%, approximately 0.8 pp. over the yield of government securities issued in the same currency and with the same maturity. The issue was oversubscribed 1.35 times. The bonds are to be included in the bank's own funds and eligible debts base, after the prior confirmation of eligibility by the central bank.

The funds raised will be directed to finance Raiffeisen Bank's eligible projects to ensure the transition to a sustainable economy.

"Through the second issue of green bonds on the local market, we reaffirm our commitment to mobilize financial resources for sustainable purposes and to integrate social and environmental aspects in risk management, in order to ensure a progressive decarbonisation of our loan portfolio," Raiffeisen Bank president and CEO Steven van Groningen said.

This bond issue was Raiffeisen Bank's fifth listed on the Bucharest Stock Exchange.

Raiffeisen Bank Romania has over 20 years of activity in the Romanian banking sector and over 2.2 million customers, individuals, and legal entities. The bank has over 4,800 employees, over 300 agencies across the country, around 700 automatic telling machines, 400 multifunction machines and a network of over 24,500 points of sale.

Raiffeisen Bank SA is among the biggest banks in SEE, for more reference take a look at Top 100 banks
Share this story
Facebook Twitter Linkedin Email
Tags
SeeNews in Brief