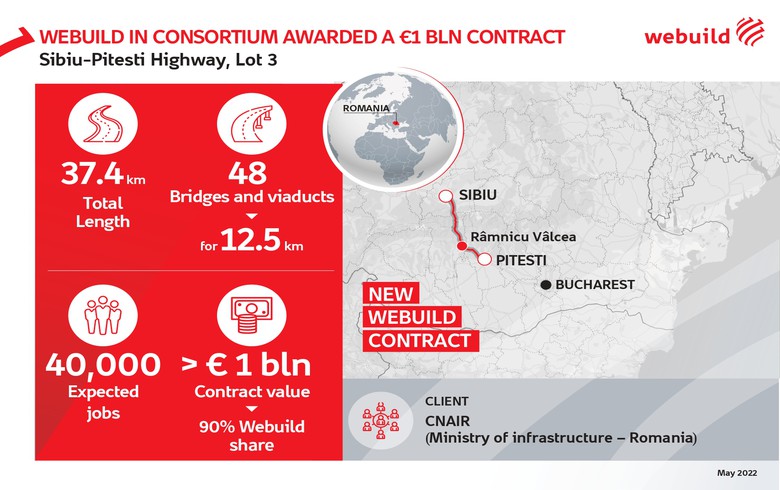 The design and construction works are expected to take up to 57 months, with the warranty period set at ten years, CNAIR said in a press release.

Works on the 37.4 km section between Cornetu and Tigveni will be done by a consortium comprising Webuild and local partner Tancrad. The two companies will build 95 bridges and passages, a tunnel with two independent galleries, the Cornetu and Valeni road junctions and an ecoduct in the Calinesti area.

The contract will be financed by non-reimbursable EU funds.

Webuild announced that it has won the contract in May, adding that the construction of the section will create more than 40,000 jobs.

Webuild is already working on Lot 5 of the Sibiu-Pitesti highway, located 10 km from Lot 3. Once the five sections under construction are completed, the Sibiu-Pitesti highway will be more than 122 km long, connecting central and western Romania to Europe’s highway network as part of the Rhine-Danube Corridor of the Trans-European Transport Network (TEN-T).

Webuild SpA is an Italian industrial group specialised in the construction and civil engineering business headquartered in Milan. The group employs more than 80,000 in 100 countries. The group has built over 2,400 km of tunnels and 80,300 km of roads and highways across the globe and is working on multiple projects for the TEN-T.

Established in 1995 in the eastern county of Galati, Tancrad is specialised in repairs and maintenance of roads, runways and platforms for aircraft, in civil and industrial construction works, repairs on the Arcelor Mittal Steel platform and in the production of asphalt mixtures, according to its website.