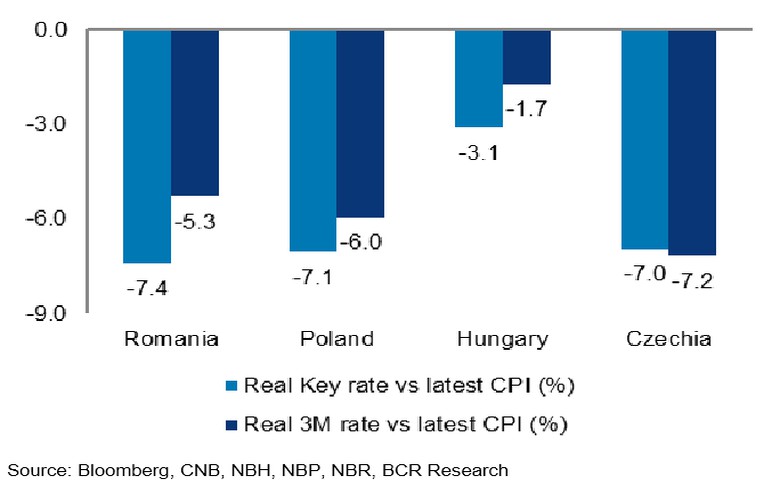 BUCHAREST (Romania), May 6 (SeeNews) - Romania's central bank, BNR, is likely to increase its key rate to 4% from 3% at its May 10 meeting in order to keep up with its peers in Central and Eastern Europe (CEE), Austria's Erste banking group said on Friday.

The credit facility rate, which remains the relevant operational policy instrument under tight liquidity management policy, should reach 5% from currently 4%, Erste analysts said in a short note on Romania.

By the end of the year, Erste expects the central bank to hike the key rate to 5.50% and the credit facility rate to 6.50%.

According to Erste, inflation will be 11.5% by year-end, peaking around 12.0% in June, with core inflation converging to headline by year-end.

"The inflation is likely to be sticky and we see both core and headline CPI around 7% by end-2023 and falling just inside the BNR target range towards end-2024," the analysts added.

Romania's consumer prices rose by 10.15% year-on-year in March, compared to 8.53% in February, the most recent data from the national statistical office showed.

According to Erste, implied yields no longer offer premium for the lei versus the CEE currencies and heavy central bank involvement in the FX market to ensure currency stability after the outbreak of the war in Ukraine should be supported by higher cost of carry to protect FX reserves.

The BNR resumed lei-denominated sovereign debt buying in the secondary market on March 8 to provide liquidity to the banking system.

"We see the central bank actions aimed at providing liquidity to the bond market and backstopping it during sell-off rather than targeting certain yield levels. Given the depth of the Romanian financial markets these objectives could be reconciled with FX stability over a reasonable period," Erste said in the note.

In Erste's view, the BNR should come up with a mix of frontloaded rate hikes and allowing higher bond yields and weaker lei to restore the government bonds' attractiveness.