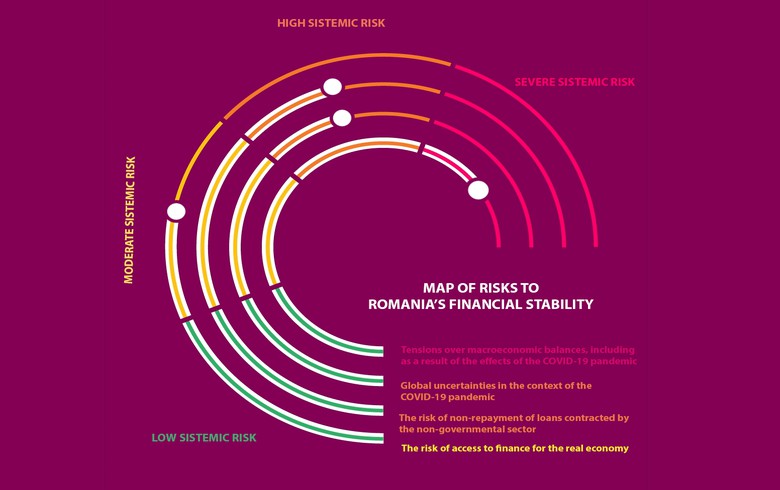 Since the release of the previous report in June 2020, one severe systemic risk was identified, namely tensions at the level of internal macroeconomic balances, including ones resulting from the Covid-19 pandemic, the central bank, BNR, said in its latest financial stability report.

The central bank identified two other high risks to financial stability - persisting uncertainty about the return to global economic activity in the context of the pandemic, and the potential non-repayment of non-government loans. The bank identified as a moderate risk factor the real economy's access to financing.

At the onset of the pandemic, the European Commission had opened an excessive deficit procedure against Romania but in November it decided not to take further steps within the procedure for the time being due to the uncertainty caused by the pandemic.

In 2020 Romania's budget deficit stood at 9.7% of the gross domestic product (GDP), as compared to 4.58% of GDP a year earlier. Budget revenues in 2020 were 0.4% higher on the year, supported by a robust absorption of European funds that offset the decline in revenues due to fiscal facilities offered to companies and to the population. Budget expenditures were 14.8% higher on the year.

Public debt increased by 12 percentage points in 2020, representing 47.3% of GDP, close to the 50-55% of GDP margin considered sustainable by the central bank, the report showed.

The bank advises financial measures to support the activity of companies and the encouragement of new investments, measures aimed at ensuring the resilience of the labour market by partially covering wage costs, providing tax facilities for new employees, and flexibility of work schedule. According to BNR, these measures are essential to mitigating the long-term effects of the health crisis on the production capacity of the economy and the wealth of the population.

"Improving the governance of public investments, focusing mainly on strategic areas, as well as the greater use of European funds are elements that can direct our country's economy towards a new growth model, while reducing the pressure on budgetary resources," BNR also said.