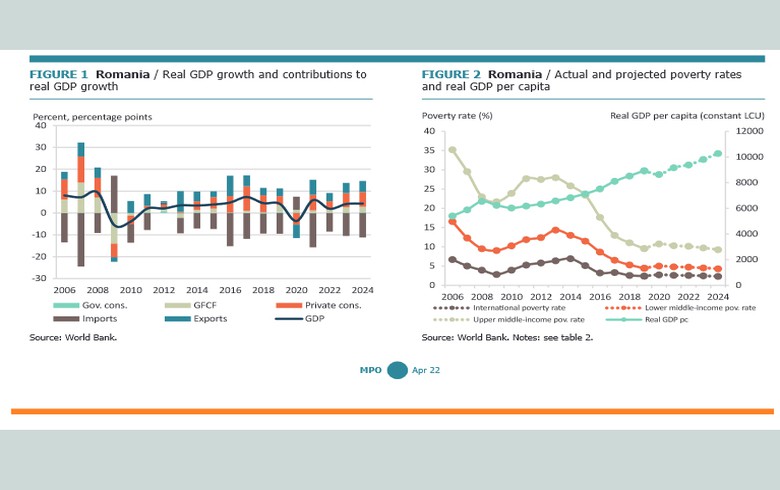 BUCHAREST (Romania), April 11 (SeeNews) - Romania's economy is expected to grow by 1.9% in 2022 with risks strongly tilted to the downside, the World Bank said, cutting its January forecast of a 4.3% gross domestic product (GDP) growth.

"Romania’s economy rebounded at 5.9% in 2021, despite supply disruptions, a significant pick-up in inflation and the effects of the pandemic. The economy is projected to modestly expand in 2022, although recession risks resulting from the Ukraine crisis are high," the World Bank said in its Europe and Central Asia Economic Update Spring 2022 report published on Sunday.

The strength of the recovery will depend on the evolution of new Covid-19 variants and the severity of the hostilities in the region, while Romania’s capacity to absorb the EU funds will be critical to a sustainable, green, and inclusive recovery process, the lender added.

According to government estimations, in a scenario of 100% absorption, the Resilience and Recovery funds will, on average, add around one percentage point to Romania’s real GDP growth per year between 2022 and 2026. However, low historical absorption rates reflect substantial headwinds to a high absorption scenario, the bank also noted.

In the bank's view, significant inflationary pressures from the energy and food markets challenge the nascent recovery requiring a careful balancing act from the central bank. A substantial reduction of the fiscal deficit in 2022 is improbable, as the government will have to support the economic recovery process while also supporting macroeconomic stabilization, the lender added.

Regarding the fiscal deficit, the bank expects it to follow a downward trajectory over the medium term, but it is still likely to remain above 3% of GDP. Renewed attention should be given to fiscal consolidation to avoid an unsustainable increase in public debt over the medium term, the World Bank also said.

Poverty is projected to decline to the precrisis level by 2024. However, rising food and energy prices, and declining remittance incomes could mean a longer recovery process for vulnerable population segments compared to others in the coming years, according to the report. A protracted war in Ukraine may however push growth into negative territory and lead to an increase in poverty in the short run, the World Bank concluded.

For 2023, the World Bank expects the Romanian economy to expand by 4.1%, higher than the previously projected 3.8% rise in GDP.

The World Bank's estimations are more pessimistic than those of government, which targets 4.3% and 5.1% economic growth in 2022 and 2023, respectively.

In March, the European Bank for Reconstruction and Development (EBRD) said Romania's GDP will increase by 2.8% in 2022, lowering its November forecast for 4.4% growth.