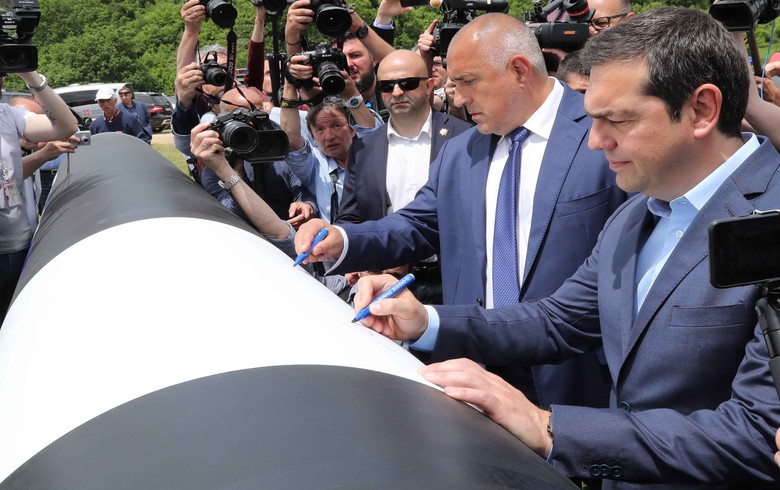 SOFIA (Bulgaria), May 23 (SeeNews) - Greece and Bulgaria, which have started building their natural gas interconnection, may extend to Romania and Serbia the flow of gas they are set to receive via the Trans Adriatic Pipeline (TAP), Greek prime minister Alexis Tsipras has said.

"The pipeline can be extended to Serbia through the Interconnector Serbia-Bulgaria, as well as to Romania via the Interconnector Bulgaria-Romania, which will help them to diversify their sources of supply," Tsipras said in a video file posted on his Facebook page on Wednesday.

These extensions would strengthen the geopolitical role of Greece and Bulgaria, Tsipras said during the groundbreaking ceremony for the construction of the 220 million euro ($245.7 million) Interconnector Greece-Bulgaria (IGB) in southern Bulgaria. Through this link Bulgaria will be able to receive Azeri gas from TAP, as well as liquefied natural gas from the terminal located near the Greek Aegean city of Alexandroupolis.

"In recent years, Greece, Bulgaria, Romania and Serbia have worked on the prospect of a ring of connectivity in the region," Tsipras said.

The planned length of IGB is 182 km and the projected capacity will be up to 3 billion cu m per year in the direction from Greece to Bulgaria. Depending on interest from the market and the capacities of the neighbouring gas transmission systems, the capacity of the pipeline can be increased up to 5 billion cu m per year, thus allowing for physical reverse flow from Bulgaria to Greece with the additional installation of a compressor station.

TAP is part of the Southern Gas Corridor, which also comprises the South Caucasus Pipeline (SCP) crossing Azerbaijan and Georgia, and the Trans Anatolian Pipeline (TANAP). Connecting with the TANAP at Greece's border with Turkey, TAP will stretch across northern Greece, Albania and the Adriatic Sea before reaching southern Italy's coast where it will connect to the Italian natural gas network.