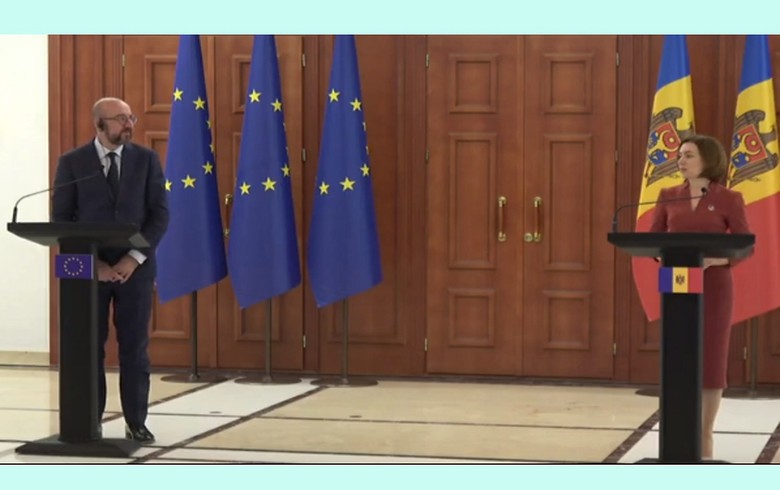 CHISINAU (Moldova), May 4 (SeeNews) - The European Union plans to significantly increase military support for Moldova in the context of the Russian invasion of neighbouring Ukraine, European Council president Charles Michel said on Wednesday.

"We will help Moldova strengthen its resilience and cope with the consequences of the spill-over from Russia's aggression in Ukraine. Last year, we announced support of 7 million euro ($7.4 million) for equipment, medical and engineering needs of the army under the European Peace Facility programme. This year, we plan to significantly increase our support to Moldova by providing its armed forces with additional military equipment," Charles Michel said in a live-streamed joint press conference with Moldovan president Maia Sandu in Chisinau.

Maia Sandu stressed that the war in Ukraine has serious economic, social and humanitarian consequences for Moldova and noted that the country received over 13 million euro from the EU to cope with the impact of the massive influx of Ukrainian refugees.

"Our citizens have opened their hearts and homes to provide shelter for refugees in Ukraine. More than 90,000 of them remain in our country. We count on the support of our partners so that we can continue to offer support to those fleeing the war," Sandu said.

"We count on your support for the accession of Moldova to the Single Euro Payments Area and the acceptance of Moldovan mobile operators in the European roaming network. Deep integration with the European market will increase the resilience of our economy in the context of war," Sandu added.

In March, Moldova applied for membership in the European Union.

In April, Maia Sandu said that Moldova needs to make serious financial and logistical efforts to build a professional, modern and well-equipped military in order to be able to face the many security challenges in the region. Moldova has allocated to defence spending 773 million lei ($42 million/ 39 million euro), or 0.3% or of its projected 2022 gross domestic product (GDP), data posted on the finance ministry's website showed.

On April 26, Moldova raised the security alert at some critical institutions after explosions were reported in the breakaway region of Transnistria controlled by pro-Russian separatists.

Maia Sandu stressed at the time that Moldova does not plan a blockade of Transnistria, a strip of land between the Dniester river and Moldova's eastern border with Ukraine. After a violent separation of the region from Moldova in 1992, Russia stationed several thousand troops there to support the separatist republic.