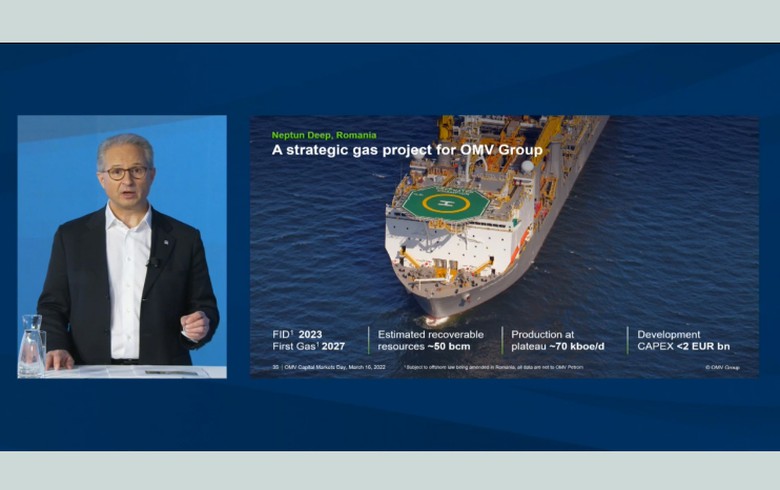 BUCHAREST (Romania), March 16 (SeeNews) - Austrian integrated oil, gas and petrochemical company OMV will make the final investment decision on the Neptun Deep natural gas project in the Romanian section of the Black Sea next year, pending a new offshore law from the Romanian parliament, its CEO said on Wednesday.

"The Neptun Deep asset in the Black Sea represents a unique opportunity for Romania and Europe to become less dependent on imports. OMV Petrom will be the operator of the block with Romgaz as a partner. Depending on a new offshore law in Romania, we expect final investment decision to be taken in 2023, with first gas in 2027," OMV CEO Alfred Stern said during a live-streamed press conference presenting the group's 2030 strategy.

"With an investment of up to 2 billion euro in Neptun Deep, we expect the block plateau production of about 70,000 barrels of oil equivalent per day, net to OMV for an estimated period of about 10 years," the CEO added.

The Romanian parliament is about to amend the offshore gas tax that has held up big projects in the Black Sea, senate president Florin Citu said in a televised statement on Tuesday.

In December, Romanian gas producer Romgaz [BSE:SNG] said its shareholders have approved the acquisition of Exxon Mobil's 50% stake in Neptun Deep. The other half of the rights and obligations under the XIX Neptun Deep Block concession is held by Romanian oil and gas group OMV Petrom [BSE:SNP], in which OMV holds a 51.011% stake.