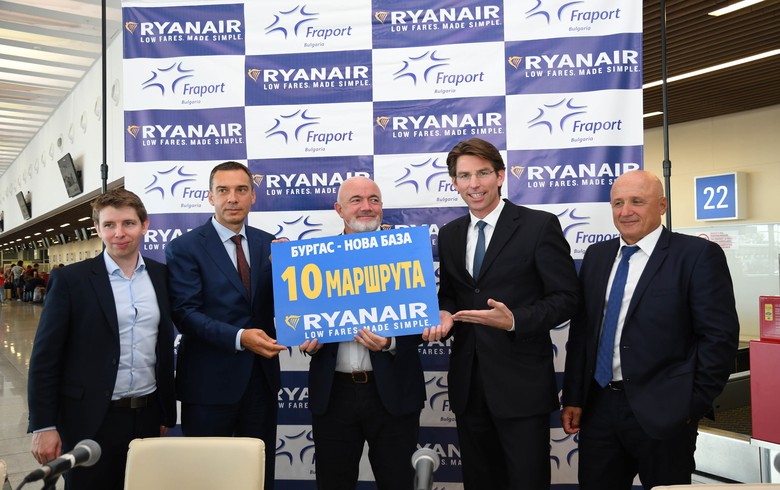 SOFIA (Bulgaria), September 19 (SeeNews) - Irish low-cost carrier Ryanair said on Tuesday it will open a new base in Bulgaria, in the coastal city of Burgas, where it will deploy one aircraft, an investment of $100 million (83.49 million euro).

The new base, the company's second in Bulgaria and 87th in Europe, will be opened at the end of March, Ryanair said in a statement.

Currently, Ryanair operates one base in Sofia with three aircraft, providing a total of 22 destinations from the Bulgarian capital.

The company will add 10 routes from Burgas, aiming to service an additional 250,000 passengers per year. Ryanair will add two weekly flights from Burgas to Bratislava, Krakow, Dusseldorf Weeze, Frankfurt Hahn, Memmingen, Milan Bergamo, Riga, Tel Aviv, Warsaw Modlin. It would also start to operate one weekly flight to the Polish city of Rzeszow.

The new investment will open an additional 200 jobs.

On Tuesday, Ryanair also released its summer schedule for 2018. It includes five additional routes - from Sofia to Paphos, from Plovdiv to Milan Bergamo, Frankfurt Hahn, Brussels Charleroi, and from Varna to Brussels Charleroi. Except the flight from Sofia which will be operated three times per week, the other flights will be operated twice a week.