Moldova's next president likely to be elected in runoff - poll 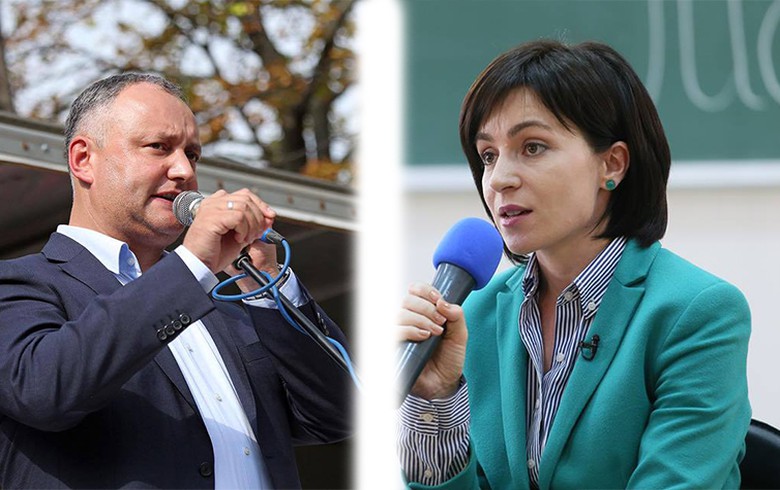 CHISINAU (Moldova), September 25 (SeeNews) - The winner of the upcoming presidential election in Moldova is likely to be decided in a runoff, as voter preferences are tightly split between the two leading candidates - Maia Sandu and Igor Dodon, the results of a recent poll showed.

Some 20% of the voters would cast their ballot for pro-European candidate and former prime minister Maia Sandu, if elections were held now, while incumbent president and former Socialist Party leader Igor Dodon would get 18% of the votes, according to the results of a poll commissioned by the International Republican Institute’s (IRI) Center for Insights in Survey Research that were published on Thursday.

Renato Usatii, head of the extra-parliamentary pro-Russian Partidul Nostru party, would win 7% of the votes, according to the answers provided by the voters regarding the first ballot scheduled for November 1.

If there were to be a runoff, 42% of respondents would vote Dodon, while 41% would favour Maia Sandu, the poll results showed.

"Moldovans are clearly disillusioned with the government’s economic management and leadership. In this highly competitive race, the presidential candidates must offer voters platforms that place their concerns front and center,"  IRI Regional Director for Eurasia Stephen Nix said in a statement issued alongside the results of the poll.

This public opinion survey was conducted on behalf of IRI by Ipsos between July 16 and August 23. The sample consists of 2,017 Moldovans aged 18 and older and eligible to vote. The margin of error does not exceed plus or minus 2.5%.

In November 2016, Sandu lost to Dodon at a thin margin - 52.11% to 47.89%. At the time, Sandu contested the election results, claimed that not enough polling stations were opened abroad and not enough ballots were available at some of the stations, but the Constitutional Court rejected her plea.

Dodon, born in 1975 in the Moldavian Soviet Socialist Republic, is a university professor in economics. Previously, he was the leader of the Party of Socialists of the Republic of Moldova (PSRM).

Sandu, born in 1972, is a former education minister. From 2010 to 2012, she worked as adviser to the executive director at the World Bank in Washington, D.C. She is the leader of the pro-European Party of Action and Solidarity and served as Moldova's prime minister for six months in 2019.

Renato Usatii, 41, is a Moldovan businessman and politician, chairman of left-wing populist opposition Partidul Nostru. He was mayor of Balti city during 2015 and 2018.