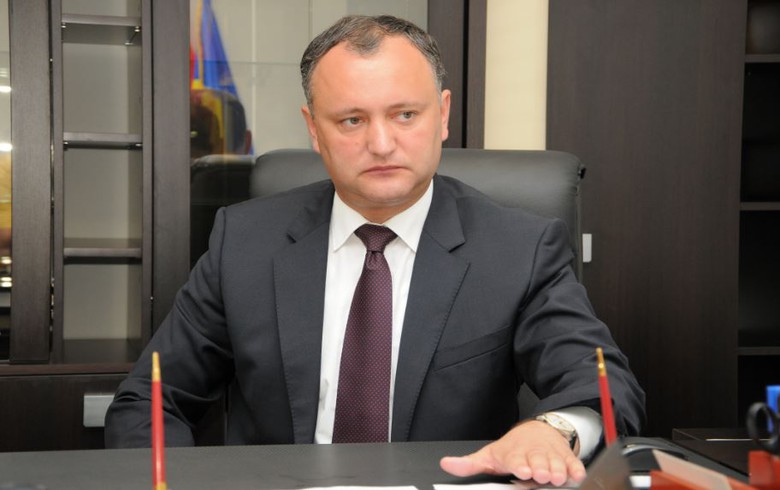 CHISINAU (Moldova), February 21 (SeeNews) - President Igor Dodon said on Tuesday that he will seek a change to the constitution in order to be able to dissolve parliament, call early parliamentary elections and ultimately turn Moldova into a presidential state.

"I am firmly in favour of early elections. I have informed the parliament and the government about this legislative initiative I will undertake, which gives the president the right to dissolve parliament," Igor Dodon said in a statement following a meeting with prime minister Pavel Filip and parliament speaker Andrian Candu. His statement was broadcast by online TV news service privesc.eu.

Dodon added that he has in mind two ways of modifying the constitution - one which would only allow the president to dissolve parliament and a second one which would enable the creation of a presidential republic.

Moldova is a parliamentary republic with a president as head of state and a prime minister as head of government. A presidential system is a system of government where the president is also the head of the executive branch of power.

Changes to the constitution can be initiated by at least 34 members of the 101-seat parliament, by the government or by citizens, who have to collect signatures in support of their proposals.

Dodon, who was elected president in November 2016, is a former leader of the Socialist Party (PSRM), the second biggest group in Moldova's current parliament. An alliance formed by the Democratic Party (PD) with 20 seats and the Liberal Party (PL) with 13 MPs oppose Dodon's ideas.

Knowing he would have difficulties winning the necessary support in parliament, Dodon said is considering to organise a referendum in which to ask citizens to vote on increasing the powers of the president.

In response to Dodon statement, parliament speaker and deputy leader of PD Andrian Candu said that holding a referendum on modifying the country's fundamental law is inopportune and useless. "Moldova does not have a good experience as a presidential republic," Candu said on privesc.eu. Moldova was a semi-presidential republic between 1991 and 2000.

Dodon reiterated that he will not agree to the opening of a NATO liaison office in Chisinau. He said earlier this month that he might consider calling a referendum on the matter.

In Dodon's opinion, the opening of a NATO liaison office in Chisinau is a provocation launched by the governing coalition in Moldova.

The tiny landlocked ex-Soviet state of Moldova has a population of some 3 million. The country has strong historical and political ties with its western neighbour Romania, with more than 75% of the population speaking Romanian. However, some 10% of the population living predominantly in the internationally unrecognised separatist republic of Transnistria, which broke away from Moldova in the 1990s, speak Russian and identify themselves as Russians.