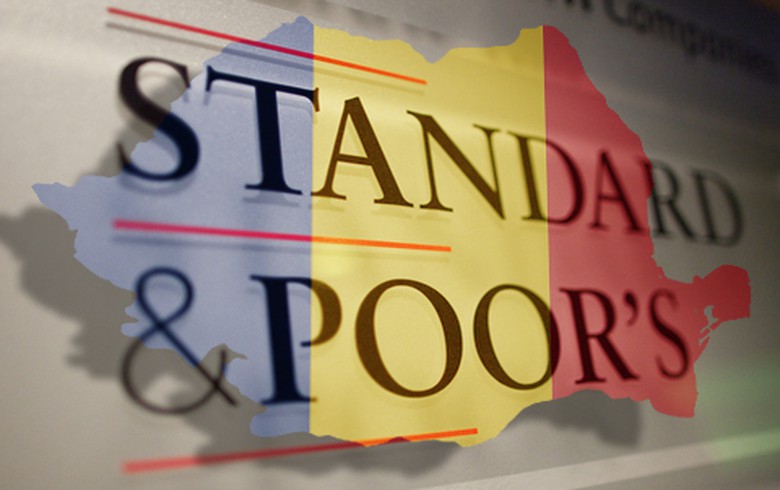 S&P expects Romania's consumption-led expansion will continue in 2019, with headline growth of just under 4%, driven by public and private consumption, it said in a statement late on Friday.

“By 2020, however, the growth cycle should reverse, with GDP weakening toward 3.0%-3.5% or potentially lower, as fiscal impetus, real wage growth, and external demand all weaken. The timing of the growth cycle is difficult to project, with the risk being that the cycle declines sooner and more forcefully than we currently forecast," the rating agency said.

S&P stressed it could lower the rating if fiscal and external imbalances persist longer than it currently projects, pushing public debt higher and leading to an over extension of real wages and the real exchange rate. Under this alternative scenario, Romania's economy would become more vulnerable to a hard economic landing.

"The outlook is stable because we expect Romania's fiscal and external debt will increase only modestly over the coming two years, despite elevated fiscal and external deficits. We also expect the large twin deficits will stabilize at somewhat lower levels as the economy cools and authorities take gradual fiscal steps," S&P said.

"The ministry's analyzes and forecasts are confirmed by S&P and this must make all investors and economic actors to trust our economic plan for Romania. At the same time, I expect that from now on all those who feel a personal impulse to make false and irresponsible statements which could sabotage the national economy to abstain themselves, given that international evaluations contradict them directly and strongly," finance minister Eugen Teodorovici said.

On March 16, S&P maintained Romania's rating at BBB-/A-3, with a stable outlook, after the Romanian government pledged it will revisit key parts of a controversial fiscal emergency decree.

Romanian finance ministry sent a letter at the time to S&P asking the rating agency not to change Romania's outlook to negative yet, as the country needs some more time to approve the 2019 budget and assess the effects of a planned tax reform.

S&P also said in the statement:

The outlook is stable because we expect Romania's fiscal and external debt will increase only modestly over the coming two years, despite elevated fiscal and external deficits. We also expect the large twin deficits will stabilize at somewhat lower levels as the economy cools and authorities take gradual fiscal steps.

We could lower the ratings if fiscal and external imbalances persist longer than we currently project, pushing public debt higher than we currently forecast, and leading to an over extension of real wages and the real exchange rate. Under this alternative scenario, Romania's economy would become more vulnerable to a hard economic landing.

Rating pressure could also come via an erosion of monetary credibility, should Romania fail to contain headline inflation, currently at 4.1%, which is the highest of all new EU member states. The risk of higher inflation could, under some scenarios, increase exchange rate volatility, with potential negative repercussions on public and private sector balance sheets.

We could raise the rating if Romania's institutional framework strengthened, translating into more predictable policymaking. Under such a scenario, we anticipate that the government would make headway on budgetary consolidation, putting net general government debt firmly on a downward trajectory.

As a result of the government's procyclical and pre-electoral fiscal stance, budgetary and external deficits will likely remain substantial over the next few years. However, we do not forecast the budgetary deficit will exceed 3.4% of GDP in 2020. Given our view that growth will remain solid (albeit lower), and nondebt external inflows will continue, we don't forecast any major deterioration in public or private debt levels between now and 2023. However, this projection could change if there was either a sharp correction in growth, a much larger fiscal deviation, an exchange rate devaluation, or a combination of the three.

Institutional and economic profile: The post-crisis economic expansion is reaching its peak

Economic growth should remain just below 4% this year before weakening in 2020-2021 due to slowing external demand, easing wage growth, and a more neutral fiscal environment.
Erratic policy execution, low administrative capacity, corruption, and polarization weigh on our institutional assessment, which is nevertheless helped by Romania's EU membership.

We expect Romania's consumption-led expansion will continue in 2019, with headline growth of just under 4%, driven by public and private consumption. This follows average wage inflation so far this year of close to 14%. By 2020, however, the growth cycle should reverse, with GDP weakening toward 3.0%-3.5% or potentially lower, as fiscal impetus, real wage growth, and external demand all weaken. The timing of the growth cycle is difficult to project, with the risk being that the cycle declines sooner and more forcefully than we currently forecast.

One of our key assumptions is that the government will tighten the budget to offset planned sizable increases in pension spending in 2020 and 2021, after national elections. We therefore project that the net contribution to GDP growth from fiscal measures in 2020 will be only mildly positive, and essentially zero in 2021.

Romania's growth dynamics remain constrained by the high net emigration of skilled labor, and weak overall population growth. Structural reforms to address these issues appear to be lacking. High wage growth in recent years has not been accompanied by comparable increases in productivity, which has in part eroded the competitiveness of Romania's exports

The economic policy environment has stabilized following the government's revision of Ordinance 114, a series of sectoral taxes including a comprehensive financial-sector balance sheet tax, which in its original construction would have likely born negative consequences for monetary policy effectiveness. Nevertheless, policy coordination among authorities is weak, and fiscal planning has been ad hoc and reactive.

On Aug. 26, 2019, the ALDE party withdrew from the government coalition, leaving the PSD party with a ruling minority. Although the lack of a cohesive opposition lessens the likelihood of early elections, the departure of ALDE from the governing coalition is likely to further handicap policy-making for the remainder of 2019. That said, we consider difficult fiscal decisions, such as curbing overall expenditure and securing fiscal room for the recent pension law, will be left to the next cabinet after the 2020 elections.

Romania's EU membership is, in our view, an important policy anchor and has been a major deterrent to recent attacks on the independence of the judiciary. To date, proposals to amend justice laws and criminal codes have stopped short of implementation, also in the face of strong domestic opposition.

Flexibility and performance profile: External imbalances are widening due to brisk consumption and expedient fiscal policy

The financing mix of Romania's current account deficit is shifting, as FDI and capital account flows temper.
We expect the government will maintain its expansionary budgetary stance until the 2020 elections.
Inflationary pressures are building from excess demand and still-strong wage growth.

We estimate that Romania's fiscal deficit will remain at about 3% of GDP in 2019 on the back of strong nominal GDP growth, the potential for extra dividends from state-owned enterprises, and a likely further slashing of the investment budget. Budgetary imbalances are building, however, with spending on wages and pensions now surpassing 80% of tax revenue. Adding to the structural challenges is the low tax collection potential in Romania, which is likely to persist despite the government's actions to step up value-added tax collection. The gap between expected VAT revenues and VAT actually collected is the largest in the EU, according to European Commission data.

Romania is preparing for presidential elections in 2019 and local and parliamentary elections in 2020. With political constituents in election mode, we expect the government deficit will widen slightly to 3.4% of GDP in 2020, partly due to efforts to secure electoral support.

We believe pressure on Romania's budget will persist through 2022. In July 2019, the government passed pension legislation, which, if implemented according to plan, would have fiscal repercussions in the short term. We estimate that the legislated pension increases would amount to 3.0% of GDP by 2021. We include only part of this estimate in our forecast, however, since we expect the government will use caveats in the pension law that subject effective pension increases to the availability of fiscal funds. Despite this, the resulting short-term political gains could continue to influence fiscal strategy, leading to a shift in budgetary allocations from the capital side to current account spending.

The Romanian government has repeatedly deviated from the medium-term objectives stipulated in the EU Stability and Growth Pact. With fiscal pressures building, we expect deficits to extend to 3.4% of GDP in 2020, which would need to be addressed by the incoming government. We expect that fiscal adjustments will likely involve scrapping some of the pension increases anticipated in the recently introduced pension law. That said, Romania's higher deficit might prompt the European Commission to open an excessive deficit procedure in 2020, which could facilitate fiscal prudence. Ultimately, the fiscal adjustment will likely result in reduced government consumption and dampen economic growth.

Romania's current account will likely remain elevated through 2022 as government consumption and domestic demand lead to higher imports. Together with slowing exports, this will result in deficits exceeding 5.0% of GDP on average over 2020-2021. We observe that the current account deficit is increasingly covered by debt-financed inflows, since FDI and capital account flows are tempering.

Moreover, we note a lack of foreign greenfield investments, suggesting that investors might be increasingly hesitant due to the rapid wage growth, lack of infrastructure development, and persisting political and policy uncertainties. For this reason, we expect Romania's external debt will keep increasing. Given the low starting point, we do not foresee a buildup of material external stock imbalances. We forecast Romania's external debt net of external public and financial sector assets to be slightly over 40% of current account receipts by 2022.

Romania's predominantly foreign-owned banking sector remains sound, in our view. The system's loan-to-deposit ratio declined to about 80% at year-end 2018 from its peak of 137% in 2008. Lending growth has remained positive for the past two years, with loans to households and loans denominated in Romanian leu increasing strongly, although this trend has recently decelerated. Nonperforming loans dropped to less than 5% of total loans by Dec. 31, 2018, down from over 21% at mid-year 2014. Liquidity and solvency ratios remain strong and banks have maintained their profitability despite low interest rates.

The leu's value is under managed float in an inflation targeting regime, with a target of 2.5%, +/-1 percentage point. We observe that the National Bank of Romania has remained independent, despite political pressure in 2018, and conducted its firm and credible monetary policy. The bank raised rates three times in 2018, by a total of 75 basis points, under efforts to ease inflationary pressures from excess demand and strong wage growth.

We forecast an inflation rate of 4.0% in 2019, which is above the central bank's target. We believe that the inflationary environment will keep the spotlight on monetary policy, due to the need to firmly anchor inflation expectations. Greater monetary independence is partly inhibited by the relatively high share of system deposits in foreign currencies."