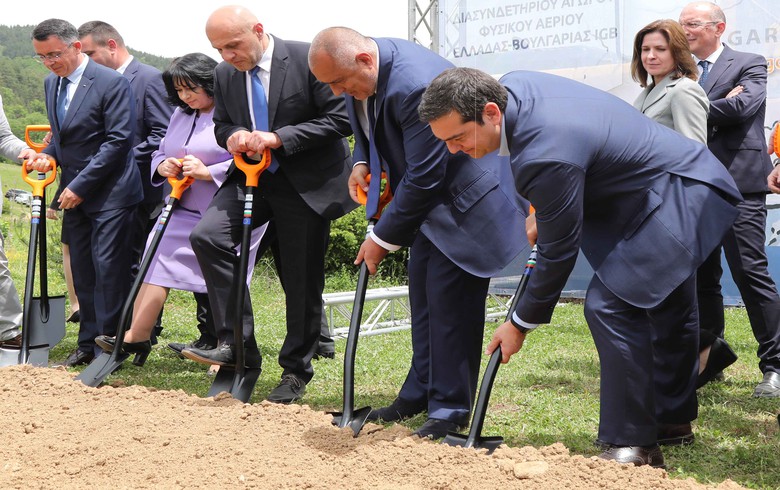 SOFIA (Bulgaria), May 24 (SeeNews) - Natural gas pipelines have been the hot topic on this week's news agenda in Southeast Europe (SEE), a region heavily dependent on Russian gas supplies. Bulgaria and Greece launched the construction of a 220 million euro gas inteconnector, while Serbia's energy minister said his country plans to build a natural gas pipeline connecting Belgrade to Banja Luka in Bosnia.

The week has also brought news of fresh Chinese investments in Serbia and yet another large shopping mall opening.

Following are the details:

Bulgaria and Greece launched officially on Wednesday the construction of a 220 million euro ($245.7 million) gas interconnector, through which Bulgaria will receive Azeri gas from the Trans Adriatic Pipeline (TAP) and could also receive liquefied natural gas (LNG) from the terminal near Greece's Aegean city of Alexandroupolis.

Speaking at the grounbreaking ceremony, Greek prime minister Alexis Tsipras said that the flow of gas may be extended to Romania and Serbia through their interconnectors with Bulgaria.

Earlier this month, ICGB - the project company developing the Greece-Bulgaria gas link project, picked Greece's J&P-Avax to buid the interconnector under a 144.8 million euro ($162.6 million) contract. Construction works should be completed in 18 months, ICGB said at the time.

The project is being implemented by the joint venture company ICGB, in which state-owned Bulgarian Energy Holding (BEH) and Greece-registered IGI Poseidon hold equal stakes.

The Belgrade-Banja Luka link will branch out from the gas transmission pipeline that Serbia is building from the border with Bulgaria to the border with Hungary as part of the TurkStream project of Russia's Gazprom, Antic said in a video file posted on the YouTube channel of the Novo Jutro programme of Serbian private TV station Pink.

"We plan a logical next step from this pipeline, the new Belgrade-Banja Luka project, a gas pipeline which would allow supplies to Bosnia and Herzegovina," Antic explained.

The pipeline will connect Belgrade and Banja Luka via Bijeljina, on the territory of the Serb Republic, one of the two autonomous entities that make up Bosnia and Herzegovina.

On Wednesday, the Serb member of Bosnia's tripartite presidency, Milorad Dodik, said the Serb Republic is interested in joining TurkStream and will discuss the matter with Gazprom on June 2. The construction of a pipeline from Bijeljina, on the border with Serbia, to the Serb Republic's main city Banja Luka is one of the items on the agenda for his forthcoming visit to Russia, Dodik said.

In Serbia, the project for building a pipeline from the border with Bulgaria to the border with Hungary is carried out by Novi Sad-based Gastrans, a wholly-owned subsidiary of Swiss-based South Stream Serbia, according to data from Serbia's commercial register. Gazprom owns a 51% stake in South Stream Serbia, while state-owned Srbijagas holds the remaining 49%, according to Gazprom data.

Gazprom plans to build a string of its TurkStream pipeline for transit of Russian natural gas to Europe from Turkey via Bulgaria, Serbia and Hungary. The offshore section of the TurkStream pipeline stretching 930 km across the Black Sea from Russia to Turkey consists of two parallel strings with annual throughput capacity of 15.75 billion cubic metres of gas each. One string is intended for consumers in Turkey, while the second will carry gas to customers in Europe.

"RTB Bor is yielding very good results on the back of a very serious investment by Zijin which will invest between $150 million and $200 million this year," Antic said in a video file posted on the YouTube channel of the Novo Jutro programme of Serbian private TV station Pink.

The company is expected to increase ore production by 10% and of copper concentrate by 30% in 2019, Antic added.

"This will have a very positive effect on our total industrial production and will give a solid contribution to Serbia's economic growth."

In April alone, RTB Bor increased the production of copper cathodes by 49% year-on-year.

The Chinese company intends to invest $1.26 billion to improve the production operations of RTB Bor, open new mines and increase efficiency, Antic said in December. Serbia will become the third largest copper producer in Europe and the share of mining industry in Serbia's GDP will grow to 5% from 1%, he noted back then.

With the opening of Ada Mall, GTC creates about 1,000 jobs in Belgrade, mayor Zoran Radojicic said during the opening ceremony, according to a press release issued by the city government.

"Ada Mall is a symbol of the policy that has been taking place in Belgrade over the last six years. Two years ago, in this place there was an old and abandoned factory, and today we have a facility in which the citizens of Belgrade will be able to spend time or make purchases," Radojicic said.

GTC has signed pre-lease contracts for 97% of the retail space of the Ada Mall thus far, the company said last week.

GTC has said that it plans to open two buildings of the Green Heart office complex in Belgrade this year and a third building of the complex in 2020.

The Polish company has already completed the construction of seven office buildings in Serbia, all of them in Belgrade. Elsewhere in Southeast Europe, GTC is present in Croatia, Romania and Bulgaria.