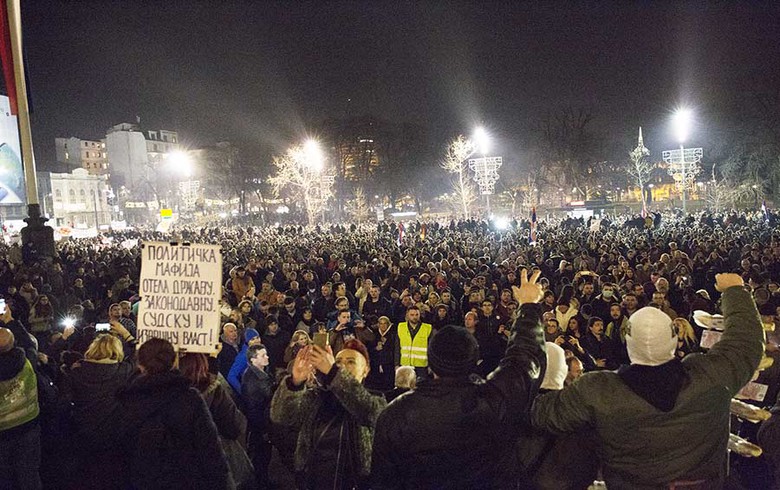 SOFIA (Bulgaria), February 22 (SeeNews) - A wave of anti-government protests have swept across several countries in Southeast Europe (SEE) this week as thousands gathered in Belgrade, Podgorica and Tirana with demands that their governments step down over corruption charges.

Following are these, and more of our top stories this week:

The MPs of Albania's biggest opposition party, the Democratic Party, resigned on Thursday in a move aimed to trigger a snap vote amid massive street protests against the Socialist government of prime minister Edi Rama.

The move came after thousands marched in Tirana over the weekend to demand Rama's resignation, accusing the government of corruption. The protest turned violent as protesters tried to storm the building where Rama's office is situated. A group of protesters broke through the police cordon around Rama's office, attempting to enter the building but was dispersed by police who used tear gas to restore order. Several protesters, including journalists, were inured, local media reported.

According to Albania’s constitution, an early election can be called only if the government loses a vote of no-confidence in parliament.

The capitals of two other countries - Serbia and Montenegro - were also rocked by anti-government protests.

The rally was organised by citizens in the social networks after entrepreneur Dusko Knezevic, majority owner of insolvent lender Atlas Banka, accused Djukanovic and his ruling Democratic Party of Socialists (DPS) of corruption.

The protest action was the second one since February 2 held under the slogan "97,000 - resist", according to media reports.

In January, Knezevic circulated a video showing him handing 97,500 euro ($110,330) in an envelope to the mayor of Podgorica, Slavoljub Stijepovic, to finance the DPS election campaign in 2016.

Stijepovic was accused of money laundering earlier this month, while DPS and its president, Milo Djukanovic, admitted that Knezevic had donated money to the party. Montenegro's Agency for Prevention of Corruption (ASK) found that DPS had violated the law, and requested that the party return the money to the budget and pay a fine of 20,000 euro.

In Belgrade, thousands joined rallies held in Serbia for the tenth weekend in a row last Saturday against what the opposition sees as an increasingly autocratic rule by president Aleksandar Vucic and the government led by the populist conservative party SNS.

Protests were held in 60 Serbian cities in addition to Belgrade, the organiser of the protests, the Alliance for Serbia led by former Belgrade mayor Dragan Djilas, said in a statement.

A series of protests have been held in Belgrade since December 7, following the assault on Borko Stefanovic, leader of the Serbian Left party. The rally was organised under the "One of five million" slogan referring to a statement by Vucic that he would not fulfil any of the protesters' demands, even if they were five million.

The completion of the deal is expected in the second quarter of 2019 and is subject to customary closing conditions and regulatory approvals, Coca‑Cola HBC said in a statement.

The acquisition adds market-leading iconic brands in a relevant, adjacent category to the Coca‑Cola HBC portfolio in Serbia and in the Western Balkans, as Bambi offers opportunities for revenue synergies through cross-promotion and complementary innovation and cost efficiencies. The Bambi business also brings a strong distribution network and product portfolio in strategically important channels such as traditional retail and HoReCa.

Bambi manufactures a range of products including biscuits, wafers and savoury snacks. The company’s brands include Bambi, Plazma, Wellness, Zlatni Pek, and Josh. In 2018, Bambi recorded revenue of 80 million euro, of which more than two-thirds are generated in Serbia and the rest predominantly in the Western Balkans.

Coca-Cola HBC is among the companies interested in the acquisition of Knjaz Milos amidst very intensive competition, Andrej Jovanovic said in a video file published on the website of public broadcaster RTS on Wednesday.

According to Serbian media reports, the enterprise value of Knjaz Milos is estimated at 260 million euro ($295.2 million).

"This would be a good deal," Jovanovic said, commenting on the reported enterprise value, according to the video file.

Swedish entertainment company Modern Times Group (MTG) said on Friday that it has agreed to sell its 95% shareholding in Bulgaria's Nova Broadcasting Group to local Advance Media Group in an all cash deal, which values the company at 185 million euro ($210 million).

The deal is expected to be closed in the second quarter of 2019 following anti-trust approval, MTG said in a statement.

The proceeds from the sale will be used to develop MTG’s global digital entertainment verticals through organic investment and mergers and acquisitions, the Swedish company explained.

"This transaction is in line with our strategic decision to find new owners to invest in our international entertainment operations, while we focus on our global digital verticals," Joergen Madsen Lindemann, MTG President and CEO, said.

Nova Broadcasting Group comprises seven TV channels, as well as complementary online businesses that reach on average 74% of the Bulgarian population on a monthly basis, according to the statement. In 2018, the company generated sales of 1.15 billion Swedish crowns ($124 million/109 million euro) and earnings before interest and taxes (EBIT) of 223 million Swedish crowns.

"The termination of the agreement with PPF Group follows the decision by the Bulgarian Commission for the Protection of Competition to disallow the proposed sale to PPF Group, as well as the expiration of an extended long-stop date under the sale and purchase agreement," MTG said at the time.

For its part, PPF completed the acquisition of a 100% holding in Serbia-based Telenor Banka from Norway's Telenor Group, the lender said on Thursday.

The transaction is a natural follow-up on the previous acquisition of Telenor Group’s telecommunications assets in Central and Eastern Europe, specifically in Hungary, Bulgaria, Serbia and Montenegro by PPF, Telenor Banka said in a statement.

In July, PPF completed the acquisition of Telenor's telecommunications assets in Bulgaria, Hungary, Montenegro and Serbia for 2.8 billion euro on an enterprise value basis.

Telenor Group acquired Telenor Banka from KBC Bank Serbia in 2013. The bank specialises in innovative online financial services and was the first fully mobile and online bank operating in Serbia.

Telenor Banka provides its services primarily to Telenor clients. Currently, its portfolio includes more than 400,000 customers. At the end of 2018, the bank had under its management assets worth 135 million euro ($153 million).

PPF Group operates in 22 countries across three continents and is the largest private investment group in Central and Eastern Europe (CEE). It invests in multiple market segments such as banking and financial services, telecommunications, biotechnology, insurance, real estate, mining and agriculture.

Microsoft said on Wednesday it has detected disinformation attacks targeting accounts of employees of the German Council on Foreign Relations, The Aspen Institutes in Europe and The German Marshall Fund in several countries, including Serbia and Romania.

"The attacks against these organisations, which we are disclosing with their permission, targeted 104 accounts belonging to organization employees located in Belgium, France, Germany, Poland, Romania, and Serbia," Microsoft's Corporate Vice President Tom Burt said in a blog post.

The Microsoft Threat Intelligence Center (MSTIC) continues to investigate the sources of the attacks and is confident that many of them originated from a group called Strontium, Burt said.

"The attacks occurred between September and December 2018. We quickly notified each of these organizations when we discovered they were targeted so they could take steps to secure their systems, and we took a variety of technical measures to protect customers from these attacks."

"They validate the warnings from European leaders about the threat level we should expect to see in Europe this year."

Microsoft AccountGuard, part of the Defending Democracy Program of Microsoft, is a cybersecurity service available at no extra cost to all political candidates, parties, and campaign offices operating at a local or national level. It is also available to think tanks, non-profits, and non-governmental organisations working on issues related to democracy and electoral integrity.