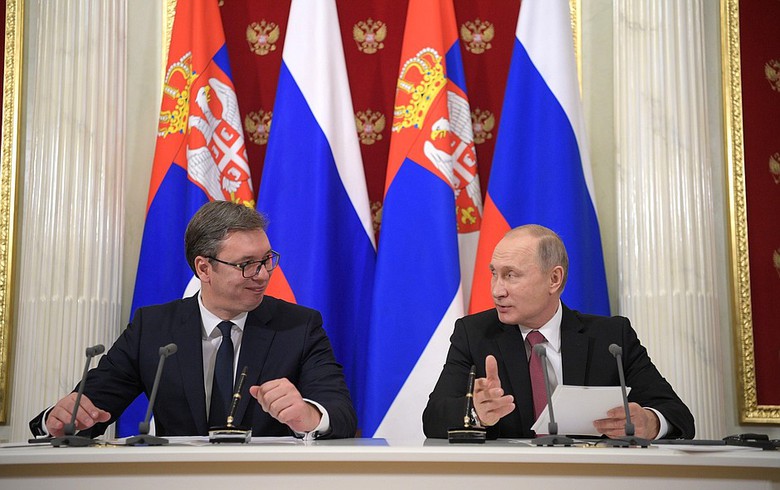 SOFIA (Bulgaria), January 18 (SeeNews) - Russia and Serbia signed more than 20 deals for cooperation, including a 230 million euro ($263.5 million) contract for upgrades of the Serbian railway network, during a visit by Russian president Vladimir Putin to Belgrade on Thursday.

On the corporate segment, Greece's OTE group entered into an agreement to sell its entire stake in Telekom Albania to a Bulgarian company for a total consideration of 50 million euro ($57.2 million), while South Korea's Samsung concluded the sale of its 43 MWp PV portfolio in Bulgaria to Germany's KGAL and Czechia-based Portanero Invest in what is the largest deal for operational solar plants in Bulgaria to date.

Following is a recap of the most interesting developments in Southeast Europe over the past week.

SERBIA TO EXPAND COOPERATION WITH RUSSIA ON ENERGY, INFRASTRUCTURE PROJECTS

"These contracts are already worth 230 million euro today, and I believe that, if everything goes according to plan, they can reach 660 million euro," Vucic said during a joint news conference with visiting Russian president Vladimir Putin on Thursday, according to a press release issued by the Serbian president's office.

The deal between Infrastruktura Zeleznice Srbije and the Russian railway infrastructure engineering company envisages the design and implementation of three projects - electrification of the Stara Pazova - Novi Sad railway section, construction of a modern dispatch centre, as well as continuing with the overhaul of the section from Valjevo to Uzice, part of the railway line linking Belgrade to the Montenegrin port of Bar,
Serbia's infrastructure minister Zorana Mihajlovic said earlier this week.

The deal between RZD International and the Serbian company was just one of more than 20 agreements and memorandums of cooperation in various spheres signed during the official visit of Vladimir Putin in Belgrade, local media reported.

These include an agreement between Serbian power utility EPS and Russia's Power Machines company for renovation of hydro power plant Djerdap 2, a memorandum on Russian-Serbian cooperation in the electricity sector, an agreement on the use of nuclear energy for peaceful purposes with Russia's Rosatom, private TV channel N1 reported.

Another key deal signed during Putin's visit was a Memorandum of Understanding between Serbian gas monopoly Srbijagas and Gazprom for expanding the capacity of the underground gas storage facility Banatski Dvor in Serbia from 450 to 750 million cubic meters and doubling the maximum withdrawal capacity to 10 million cubic metres per day.

The MoU sets the main parameters of the planned expansion and enshrines the agreement between the two companies on the joint implementation of the project, Gazprom said in a statement.

Gazprom said it delivered 2.15 billion cubic meters of natural gas to Serbia last year, up 1.2% over 2017

The opening of the Kosovo Customs office will facilitate the movement of goods and people, Rama said during the opening ceremony, according to a video file posted on his Facebook page.

The Albanian prime minister also said the new office will reduce costs and save time for Kosovo's businesses and will boost trade between Kosovo and Albania.

In November, Rama said that all trade barriers between Albania and Kosovo will be removed in the first half of 2019.

“Zero tariffs and zero non-tariff barriers within the first half of next year between Albania and Kosovo,” Rama said in a press release at the time.

Albania and Kosovo will also work towards harmonization of legislation for all documents and certificates of products, Rama said, adding that what is submitted in Albania as a document should be considered a document issued in Kosovo and vice versa.

The opening of the Kosovo Customs office in Durres comes less than two months after the government in Pristina increased the import tariffs on all goods produced in Serbia and Bosnia to 100%, saying the measure aimed to protect Kosovo’s sovereignty and interests.

Serbia was the biggest importer into Kosovo with around 450 million euro ($511 million) of imports in 2017, whereas imports from Bosnia amounted to around 82 million euro, according to data from Kosovo’s statistical office. Serbia's exports to Kosovo were completely suspended as of December 31,
Serbian trade minister Rasim Ljajic said earlier this month.

Greece's OTE group said on Wednesday it has entered into an agreement to sell its entire stake in Telekom Albania to Bulgarian company Albania Telecom Invest for a total consideration of 50 million euro ($57.2 million).

The transaction is expected to be closed within the first half of 2019. The agreement will be subject to the customary closing conditions, including the approval by the competent local authorities and financing.

“It is a strategic decision, in the context of OTE Group’s redefined priorities and growth plans, in order to create value for all shareholders and support sustainable development,” Tsamaz noted, adding that the acquisition of the company by a strong and entrepreneurial investment group ensures its growth and creates the conditions to further strengthen its market position.

Telekom Albania, whose majority shareholder is OTE, Deutsche Telekom's subsidiary in Greece, operated as Albanian Mobile Communications (AMC) until July 2015. The company was acquired by OTE Group in 2000. In 2009 with Deutsche Telekom acquisition of OTE it indirectly became part of Deutsche Telekom.

South Korea's Samsung has concluded the sale of its 43 MWp PV portfolio in Bulgaria to Germany's KGAL and Czechia-based Portanero Invest in what is the largest deal for operational solar plants in Bulgaria to date, a consultant on the deal told SeeNews on Wednesday.

The transaction was officially closed on January 7, Raiffeisen Bank International (RBI), which acted as financial sell-side adviser to Samsung, told SeeNews in an emailed statement.

KGAL ESPF 4 Holding, the investment arm of KGAL, together with Portanero Invest, a company related to Czechia-based Micronix Group, have agreed to acquire from Samsung C&T Corporation its Bulgarian PV portfolio consisting of seven solar power plants for an undisclosed price, RBI said.

In December, the deal received the go-ahead from the competition regulator.

The combined market share of the seven plants and the financial groups to which Portanero Invest and KGAL belong does not exceed 5% both in terms of installed PV capacity and output, the competition authority said in its decision.