Romania's UMP to set up JV with Italy's Beretta 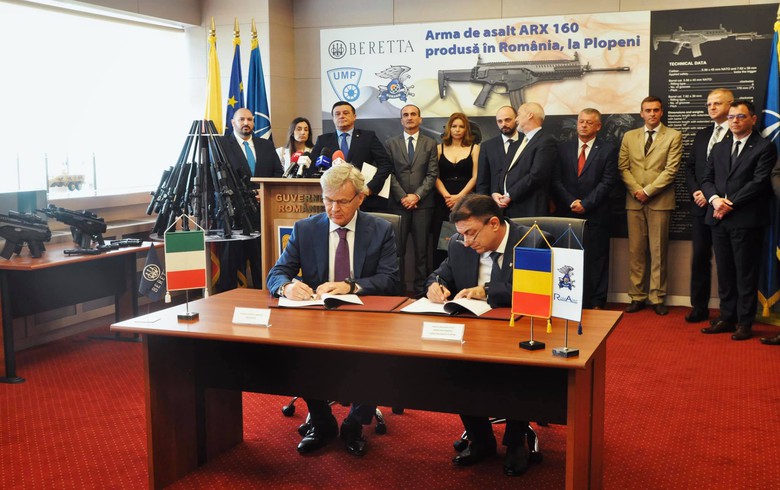 The two companies signed a memorandum of understanding on the project under which initially 15% of the weapons' components will be manufactured in Romania but the percentage will increase over time, the economy ministry said in a press release.

The Romanian state will control 80% interest in the joint venture company through UMP,  while the remainder will be held by Beretta Holding.

"This is an important moment, a strategic project, this protocol between Beretta and the Plopeni plant. We will be able to produce a state-of-the-art  weapon at Plopeni. We will make here  a Romanian product, even if it is under the name Beretta. In the near future, the joint venture company will be set up, and within six months at the latest production will begin," economy minister Niculae Badalau said.

According to Badalau, the JV contract will provide for the upgrading of the UMP production facilities under a 6.5 million euro ($6.76 million) investment which Beretta has pledged to make at UMP.

"The start of the works will be gradual and Beretta will help Romarm manufacture the components. For us, this is an important medium- and long-term project and it is also significant for us to establish a project in a country like Romania," Beretta Holding president Franco Gussalli Beretta said.

Beretta is a privately held Italian firearms manufacturing company operating in several countries. Its firearms are used worldwide for a variety of civilian, law enforcement, and military purposes.

Romania, which joined NATO in 2004, plans to spend a total of 9.8 billion euro until 2026 to boost its defence capabilities, the National Defence Council (CSAT) said in August. A defence spending target of 2% of GDP was set at the NATO summit in Wales in 2014.