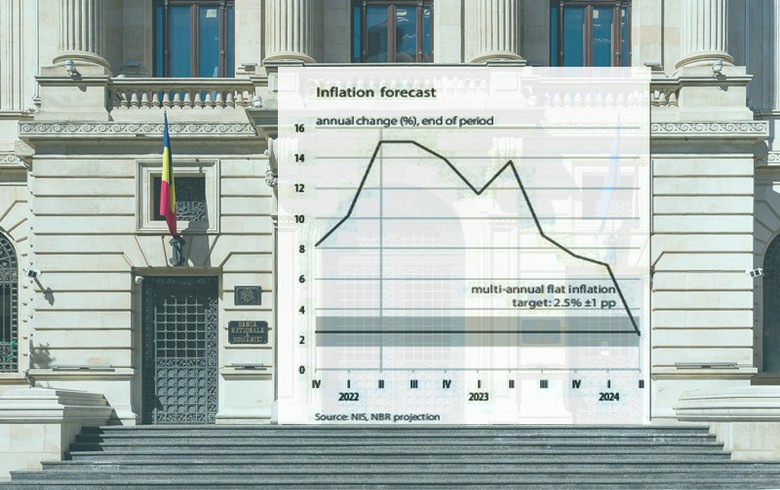 BUCHAREST (Romania), August 9 (SeeNews) - Romania's central bank said on Tuesday it is increasing its inflation forecast for 2022 to 13.9% from 12.5% predicted in May, way above the upper end of its target band of 1.5-3.5%, due to supply side constraints amplified by the war in Ukraine.

"Since the publication of the May 2022 Inflation Report, which had already pointed to an unusually high level of uncertainty, associated with economic, social and geopolitical developments, part of the risks identified at that moment have materialised. Thus, global market sentiment worsened further, also amid the unexpected, ongoing and across-the-board inflation spike, which spurred inter alia the continuation of the monetary policy normalisation cycle in both emerging and advanced economies," the BNR said.

Under the current baseline scenario, the strongest economic effects of the war in Ukraine are anticipated to occur this year, yet at a faster-than-previously-foreseen pace, with further prospects of gradually fading in 2023 and 2024, the Romanian central bank added.

Moreover, the global supply/demand imbalance for many commodities, chiefly energy (natural gas, electricity), increased in the past few months, triggering – given their large share in companies’ production costs – an erosion effect on economic activity.

"In conjunction with the disruptions in agri-food commodity markets, quasi-dominated by Russia and Ukraine, as well as with the visibly lower demand of external partners in Europe, a relative stagnation of Romania’s economy is foreseeable over the coming quarters," the BNR said.

In order to counter the adverse effects of rising commodity prices on the economy, the national authorities could decide to carry on some of the existing support schemes or, where appropriate, introduce new ones, the design of which is difficult to anticipate at this time, according to the central bank.

The BNR noted that Romania benefits from quite generous EU funds allocations that boost productive capital, consisting in a medium-term buffer for adverse shocks and, at the same time, a counterpoise to the inevitable trend of rising labour costs.

Romania's consumer prices rose by 15.05% year-on-year in June, compared to an increase of 14.49% in May, the national statistical office said last month.

On August 5, the BNR said it decided to increase its monetary policy rate to 5.50% from 4.75%, aiming to anchor inflation expectations over the medium term, as well as to foster saving through higher bank rates.