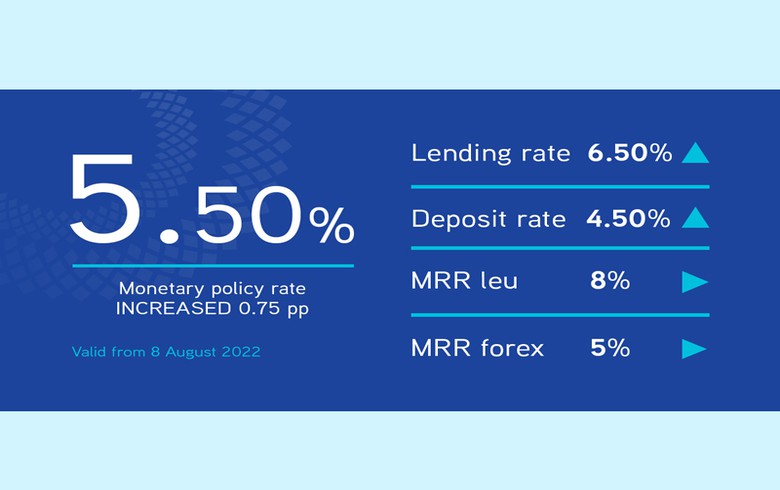 BUCHAREST (Romania), August 5 (SeeNews) - Romania's central bank said on Friday it will increase its monetary policy rate to 5.50% from 4.75% as of August 8.

The central bank, BNR, also decided to increase the deposit facility rate to 4.50% per year from 3.75%, and the lending facility rate to 6.50% from 5.75%, it said in a statement after a board meeting on monetary policy.

The decision aims to anchor inflation expectations over the medium term, as well as to foster saving through higher bank rates, so as to bring back the annual inflation rate in line with the 2.5 percent ±1 percentage point flat target on a lasting basis, in a manner conducive to achieving sustainable economic growth, the bank said.

The existing ratios of minimum reserve requirements for both leu-and foreign currency-denominated liabilities of banks will remain unchanged.

Romania's consumer prices rose by 15.05% year-on-year in June, compared to 14.49% in May, the latest data from the statistics office showed.

According to BNR, the updated forecast shows the prospects for the annual inflation rate to level off in the third quarter and gradually decline later on, yet on a path revised moderately upwards.

The prospects for the annual inflation rate to level off and decrease rely on a milder impact of global supply-side shocks in the context of energy price capping schemes implemented until March 2023. Also, inflation might decline due to a a sizeable disinflationary base effects, alongside influences from the likely rapid contraction and closing of the positive output gap in mid-2023, followed by the output gap widening into negative territory, the central bank explained.

However, notable risks continue to come from developments in energy commodity prices, as well as from the persistent bottlenecks in production and supply chains — in the context of the war in Ukraine and the related sanctions —, to which add those from the protracted drought domestically and in other European countries.

Also, the war in Ukraine and the sanctions against Russia remain a major source of uncertainties and risks to the outlook for economic activity, the BNR said.

At the same time, the absorption of EU funds, especially those under the Next Generation EU programme, is conditional on fulfilling strict milestones and targets for implementing the approved projects. "It is vital to absorb and reap the full benefits of these funds," the BNR stressed.

Major uncertainties and risks are also associated, with the fiscal policy stance, given the requirement for further budget consolidation amid the excessive deficit procedure and the overall tightening trend of financing conditions. From this perspective, the coordinates of the envisaged budget revision are particularly important, according to the central bank.

Also relevant are the European Central Bank’s and the Fed’s prospective monetary policy stances, as well as the behaviour of central banks in the region, the BNR concluded.

The central bank's next monetary policy meeting will take place on October 5.