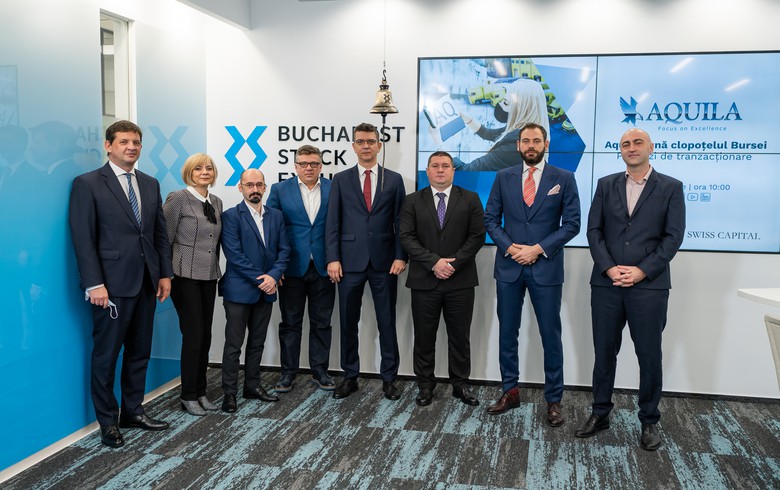 The company's shares are traded under the AQ ticker, BVB said in a press release.

The listing took place after the successful conclusion of an initial public offering (IPO) worth 367 million lei ($84 million/ 74 million euro), the largest conducted so far by an entrepreneurial company on the Romanian capital market.

"From the leading position of the distribution market, we want to make an intelligent use of the opportunities given by the market, so the revenues obtained from the IPO will be used for growth, consolidation and digitalization," Aquila Investor Relations director Jean Dumitrescu said.

Aquila sold 66,666,800 new shares at a price of 5.5 lei per share to institutional and retail investors during the IPO which took place during 8-16 November.

The company will use most of the funds to purchase companies that own major brands in the consumer goods market and distribution companies with complementary product portfolios. Also, a part of the funds will ensure working capital, digitalization of operations, increase traceability and productivity and development of own brands.

Following the IPO, two shareholders - Constantin-Catalin Vasile and Alin-Adrian Dociu, own 33.3% of Aquila's share capital each.

Aquila was established in November 1994 as an entity specialized in integrated services of distribution of consumer goods and logistics. Since 2001, the company has expanded in Moldova by setting up the distribution company Trigor AVD.

Aquila operates 14 distribution centers, 4 logistics centers and has the largest distribution fleet in Romania – 1,647 vehicles, a network of 67,000 points of sale, a storage infrastructure of 120,000 sq m and a team of 3,000 employees.