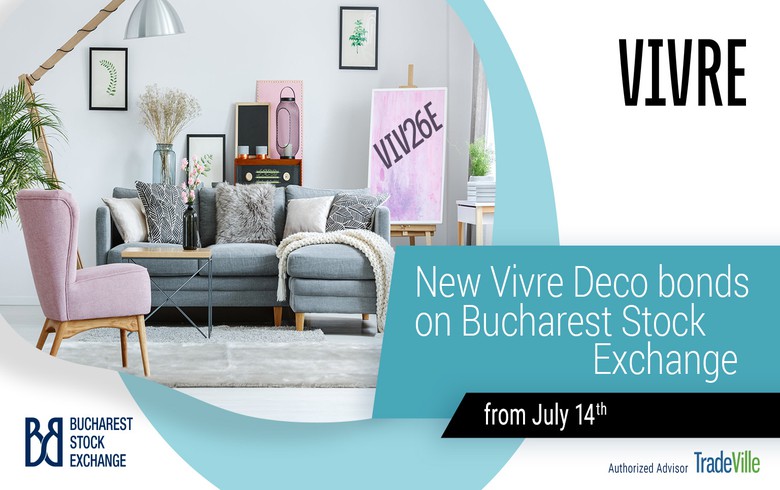 The company will use the proceeds to increase its market share and for investments in technology and automation, the bourse said in a press release.

The company carried out in April a private placement of bonds, attracting 7 million euro needed for the company’s development. The issue included 14,000 bonds with a nominal value of 500 euro per bond and an interest rate of 5.5% p.a., payable on half-yearly basis, with the maturity on April 21, 2026. During the private placement 89 investors subscribed to the offer.

In total, the company attracted from the capital market, through two bond issues, starting with March 2020, a total amount of 10.45 million euro.

"Being a public company, a status that we have obtained with the bonds listing, and the trust that investors have given us in the last two years determine us to grow in the coming years at an even faster pace, but sustainable," Vivre Deco co-founder and CEO Monica Cadogan said.

"We want to gradually become the most important marketplace in the Home & Deco category in the region we belong to. This approach requires capital, effort, and significant resources at all levels, but we are ready to innovate and do everything in our power to achieve our goals," she added.

The company said that it does not rule out tapping the capital market again by 2025.

The company, which is present in nine countries in Central and Eastern Europe, ended 2020 with a net profit of 7.4 million lei ($1.8 million/ 1.5 million euro), compared to 3 million lei in the previous year as its net turnover jumped 50% on the year to 295.2 million lei.

Vivre Deco shareholders are Neogen with 50%, Advisory Delta - which in turn is fully owned by Bulgaria-based Walnut Investments - with 45%, and Nagy Vajda Andras Peter with 5%.