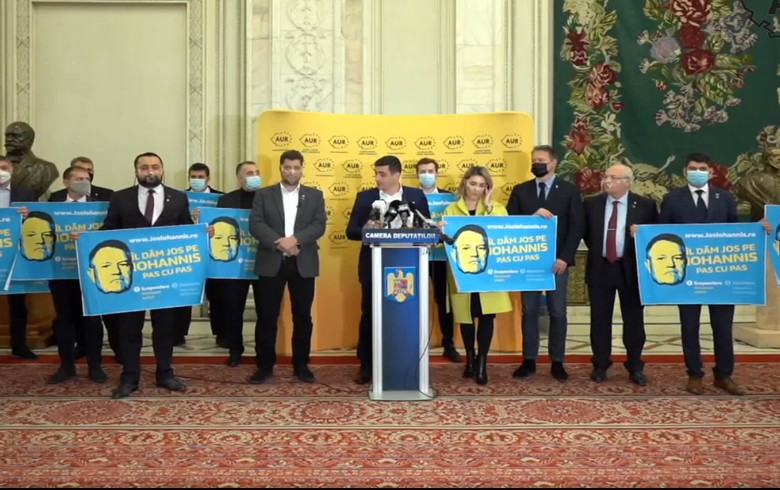 BUCHAREST (Romania), November 1 (SeeNews) - Romania's far-right Alliance for the Union of Romanians (AUR) said on Monday it has started procedures for the suspension of president Klaus Iohannis, saying that he has violated the Constitution by sliding into political partisanship.

"We started collecting signatures among MPs, we have promises from several that they will sign," AUR co-leader George Simion said during a press conference live-streamed on its social media page.

According to AUR co-leader Claudiu Tarziu, Iohannis acted against the Constitution by openly supporting interim prime minister Florin Citu in the race for leadership at the National Liberal Party (PNL) congress in September.

"...AUR draws attention on the violation of the Constitution by Klaus Iohannis after he supported a politician for the presidency of a party," Tarziu said.

Under Romania's constitution, an incumbent president who severely violates the Constitution may be suspended in a joint session of the two houses of parliament. If a suspension motion passes, a referendum for the impeachment of the president shall be called within no more than 30 days after the suspension.

On October 21, Iohannis tasked interim defence minister Nicolae Ionel Ciuca with forming a government after the previous prime minister-designate and chairman of USR PLUS party Dacian Ciolos failed to win approval for his proposed minority cabinet in parliament.

Voting for Ciuca's minority cabinet will take place on Wednesday. If the parliament rejects Ciuca's nomination for prime minister, the president can dissolve parliament and call early elections.

On October 11, Iohannis tasked Ciolos with forming a government after the Liberal cabinet led by Florin Citu lost a no-confidence vote in parliament requested by opposition left-wing Social Democrat Party (PSD) and backed by USR PLUS and AUR.