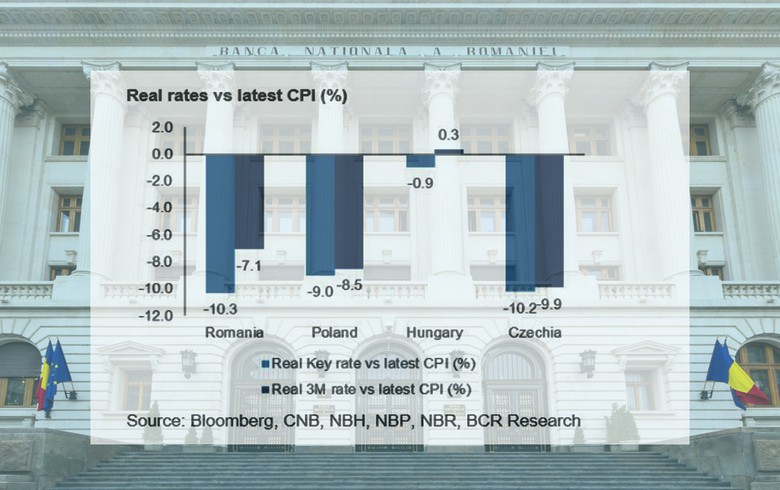 BUCHAREST (Romania), August 3 (SeeNews) - Romania's central bank is likely to increase its key rate to 5.50% from 4.75% at its August 5 board meeting in order to keep up with its peers in Central and Eastern Europe (CEE), Austria's Erste banking group said on Wednesday.

The credit facility rate, which should remain the relevant operational policy instrument under tight liquidity management policy, should reach 6.50% from 5.75% currently, Erste analysts said in a short note on Romania.

Erste expects the central bank, BNR, to hike the key rate to 6.25% and the credit facility rate to 7.25% by the end of the year.

According to Erste analysts, Romania's central bank has signalled that it aims to reduce the key interest rate gap vs. peers such as Poland going forward, while keeping the market rates broadly in line with CEE norms by tightly managing the money market liquidity in order to keep the leu stable.

"We expect the BNR to hike its key rate at the remaining three meetings for this year: by 75bp in August, 50bp in October and 25bp in November. Over the medium term, the NBR governor said that, assuming the correct fiscal policy and structural reforms, he sees CPI and the key rate converging towards each other within a year," Erste said.

Romania's consumer prices rose by 15.05% year-on-year in June, compared to an increase of 14.49% in May, the latest data from the statistics office showed.

On July 6, BNR increased its monetary policy rate to 4.75% from 3.75% because of speeding inflation and the war in Ukraine.