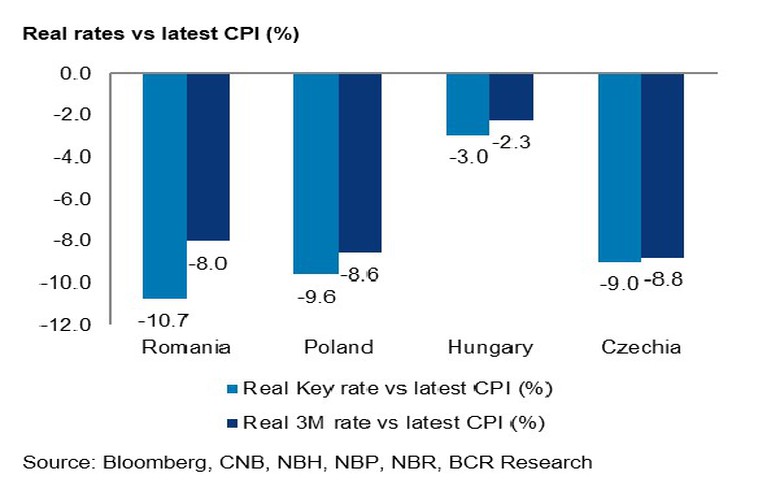 BUCHAREST (Romania), July 4 (SeeNews) - Romania's central bank is likely to increase its key rate to 4.50% from 3.75% at its July 6 board meeting in order to keep up with its peers in Central and Eastern Europe (CEE), Austria's Erste banking group said on Monday.

The credit facility rate, which should remain the relevant operational policy instrument under tight liquidity management policy, should reach 5.50% from 4.75% currently, Erste analysts said in a short note on Romania.

Erste expects the central bank to hike the key rate to 5.50% and the credit facility rate to 6.50% by the end of the year.

According to the bank's analysts, the current CPI and inflation forecast combined with wider twin deficits outlook should be strong arguments for tighter central bank policy stance compared with other CEE central banks.

"In fact, we are struggling to find reasons for lower key rate in Romania vs peers, especially after the recent GDP data revisions. Perhaps somewhat less tighter labour market remains the only argument, though looking a broad range of labour market indicators, it seems that overall, it rather adds to inflationary pressures," Erste analysts added.

The recent GDP and inflation data releases, both surprising to the upside, are likely to prompt the central bank to change its output gap assessment and subsequently lead to a more persistent elevated core inflation outlook at the next forecast revision in August inflation report, Erste added.

Recent high frequency hard data and economic confidence point to a deceleration in economic growth in the second quarter which could weigh down to some extent on forecast revisions, it added.

According to analysts, the central bank is keeping a tight grip on the currency, given the relatively high FX pass-through into CPI, its role as inflation expectations anchor and potential negative impact on consumer confidence from a meaningful depreciation. In Erste's view, expected inflows from EU money over the coming years and government external debt issuance should provide enough ammunition for the bank to weather the leu weakening pressures.

Central bank governor Mugur Isarescu recently reiterated that the central bank cannot afford a weaker leu due to the fast CPI pass-through. For the end of 2022, Erste expects an exchange rate of 5 lei per euro.

Romania's consumer prices rose by 14.49% year-on-year in May, compared to 13.76% in April, latest data from the statistics office showed.

On May 6, the Romanian central bank, BNR, increased its monetary policy rate to 3.75% from 3.00% because of speeding inflation and the war in Ukraine.