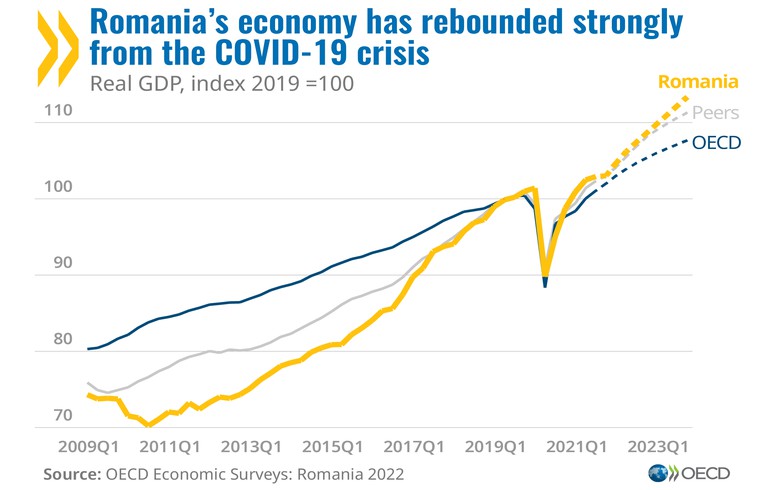 Accelerating the pace of structural reform, investing EU funds effectively while ensuring good fiscal management will help strengthen the recovery and future growth, which will lead to better opportunities for people in Romania to get ahead, the OECD said in an economic survey of the country.

According to the organisation, Romania made strong progress in raising living standards prior to the Covid-19 crisis and the resilience of its economy during the pandemic has been impressive. Now, the immediate economic as well as public health policy priority is to massively expand full vaccination coverage, which at about 40% is among the lowest in Europe.

In order to sustain its recovery over the medium to longer term, Romania must also focus on the effective implementation of its EU-funded Recovery and Resilience Plan, by strengthening its administrative capacity and carrying out necessary reforms in areas like pensions, the OECD said. Also, reforms will also need to focus on reviving productivity growth, job creation and skills development, strengthening of the rule of law and public finances.

"The immediate priority is to make more progress on the vaccination campaign. Strengthening productivity by reducing competition barriers, improving the regulatory framework, and enhancing the size and quality of the workforce will then be key to further increase living standards and facilitate convergence towards OECD income levels," OECD Secretary-General Mathias Cormann said.

Romania’s per capita gross domestic product (GDP) rose to over 60% of the OECD average, up from around just 30% in the early 2000s.

In OECD's view, the recovery is set to continue, as the survey projects Romanian GDP growing by 4.5% in 2022 and 2023, after 6.3% growth in 2021. With inflation picking up strongly and now outside the central bank’s target band, monetary policy should keep tightening as needed, the OECD stressed.

Romania needs to put in place a credible medium-term consolidation plan in order to ensure a gradual reduction of the budget deficit. This plan should include reforms to accelerate the absorption of the NextGeneration EU funds, improve the efficiency of public spending and increase the financial sustainability of the pension system in the face of an ageing population, the OECD added. Also, accelerating the modernisation of the tax administration, as well as reforms to eliminate inefficient tax provisions – notably for micro-enterprises and specific sectors like construction – and to increase less distortive taxes like property taxes would help to raise revenues and make the tax system fairer and more efficient.

Productivity in the Romanian economy sits at about two-thirds of the OECD average. An improved business environment and a strong rule of law environment helping to attract investment will be key to boosting growth and income levels further and get Romania back onto its path of economic convergence with OECD countries. Specifically, a stronger competition and regulatory framework with simpler procedures for firm entry and exit would help productive firms to thrive, invest and adopt new technologies. Investing in the green and digital transitions would also raise Romania’s growth potential while helping to move closer to its climate targets, the survey showed.

OECD also pointed out that Romania lags behind most OECD countries in ensuring access to high-quality education, healthcare, housing and transport and that the pandemic has deepened inequalities by hitting vulnerable groups hardest, especially young people, women and Roma populations.

"It is very important to leverage education and training to bring more low-skilled workers into the formal labour market. Deploying more active labour market policies and improving access to quality vocational and adult education would help address a mismatch in the labour market. Improving skills and job opportunities would also help to slow the flow of Romanian emigrants, which has already hampered economic development through labour and skill shortages," the OECD concluded.

On Tuesday, OECD's Council announced that it has decided to open accession discussions with six candidates for membership, including Romania, Bulgaria and Croatia.