Over 400,000 sign petition for regulation of ridesharing platforms in Romania 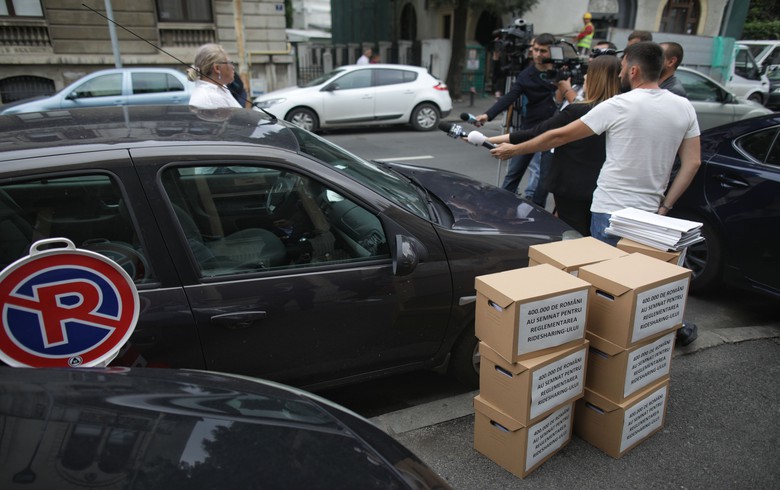 BUCHAREST (Romania), June 4 (SeeNews) - Over 400,000 Romanians have signed a petition for the regulation of ridesharing services in the country, an association of digital platforms Uber, Clever and Bolt said on Tuesday.

The association called Coalition for Digital Economy deposited the signatures collected within less than a week at the government's registration office, it said in a press release.

"Romanians - drivers and users, have shown to the government that they still want a civilized urban transport. We demonstrated that users and drivers we work with support the regulation of these modern urban transport services. We want the Government to honor the promise made by the prime minister herself and adopt at the meeting this week this emergency ordinance which regulates urban mobility services," the president of the association Catalin Codreanu said.

A new regulation imposing fines on unlicensed providers of taxi services entered into force in Romania last month, potentially spelling trouble for ridesharing platforms. According to an emergency decree adopted by the government in March and published in the Official Gazette, car drivers holding no licence for transporting passengers for a fee can be fined on the spot with up to 5,000 lei ($1,176/1,050 euro).

At the time government officials have pledged to issue another decree specifically regulating the ridesharing sector within 60 days. This has not happened yet.

According to the association, just by creating the legal space for the operation of these services will further ensure their operation at full capacity and will prevent abuses that have grown up against partner drivers. From the entry into force of the changes to the Taxi Act almost 100 drivers had the registration plates of their cars withdrawn by police, leaving them without a source of income.

"Therefore, the number of drivers active on platforms decreased by more than half compared to a normal day, and the waiting time for
orders placed through the three applications increased more than four times compared to the average of a normal day," the association said.

Riding sharing services bring annually direct and indirect benefits of over 1 billion lei ($238 million/211 million euro) and provide employment to over 20,000 partner drivers in Romania, according to the association.

All started when members of several Romanian transport unions protested in front of the government headquarters in Bucharest for several days in March, demanding the government to issue an emergency decree changing the regulations for ridesharing apps which in their view are practising 'illicit passenger transport".