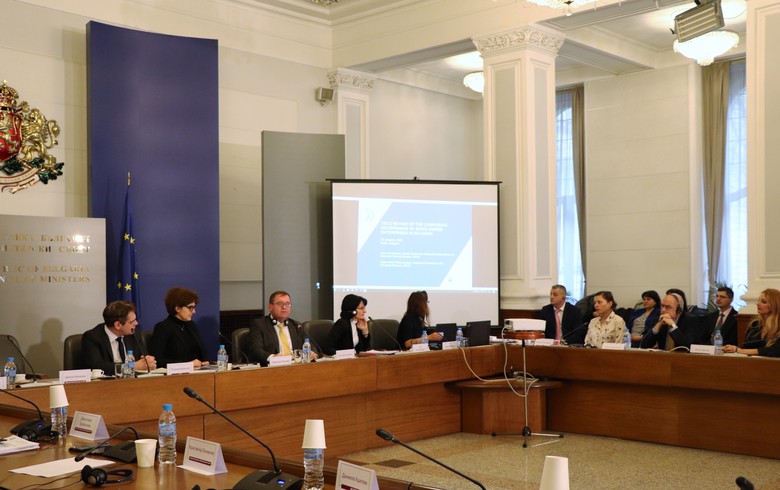 SOFIA (Bulgaria), January 17 (SeeNews) - The Organisation for Economic Co-operation and Development (OECD) recommends that Bulgaria enhances the effectiveness of the Agency for Public Enterprises and Control and establishes adequate regime of monitoring and assessment of state-owned enterprises (SOEs), the country's finance ministry said.

The organisation also recommends establishing proper rules and procedures for selection and appointment of the management bodies of public enterprises, applying the international financial accounting standards by all large public enterprises and meeting the same disclosure standards applied by listed companies, the ministry said in a statement on Thursday, following a presentation of OECD's Review of the Corporate Governance of SOEs in Bulgaria before the government.

"Recent legal reform in Bulgaria took a big step toward implementing OECD recommendations on ownership and governance of state-owned enterprises," Hans Christiansen, senior economist at OECD said in the statement.

The main priorities now are ensuring that adequate supporting regulations are put in place and that the new body of rules is fully implemented across Bulgaria’s state-owned sector, Christiansen said at the event.

The adoption of modern public policies related to the governance of SOEs in line with the best international practices will further support Bulgaria’s integration in the EU economy, Cvetan Kyulanov, head of European Commission’s representation in Bulgaria said in the statement.

Deputy finance minister Marinela Petrova added that OECD's advice will support the efforts for a state-owned enterprise corporate governance reform and for attaining the country's goal to join ERM II and the Banking Union.

The OECD review of Bulgaria describes and evaluates the corporate governance framework of the local SOE sector relative to OECD's SOE Guidelines. It was prepared at the request of Bulgaria with the purpose of being recognised as an adherent to the SOE Guidelines.

In October, the Working Party on State Ownership and Privatisation Practices to the OECD Corporate Governance Committee approved the adherence of Bulgaria to the SOE Guidelines. Bulgaria became an adherent to the Guidelines as of December 6.

Earlier in 2019, Bulgaria's economy ministry said that the country is expecting a decision for the start of negotiations on its accession to the OECD to be issued in 2020. Bulgaria first expressed its wish to join the OECD in 1992.