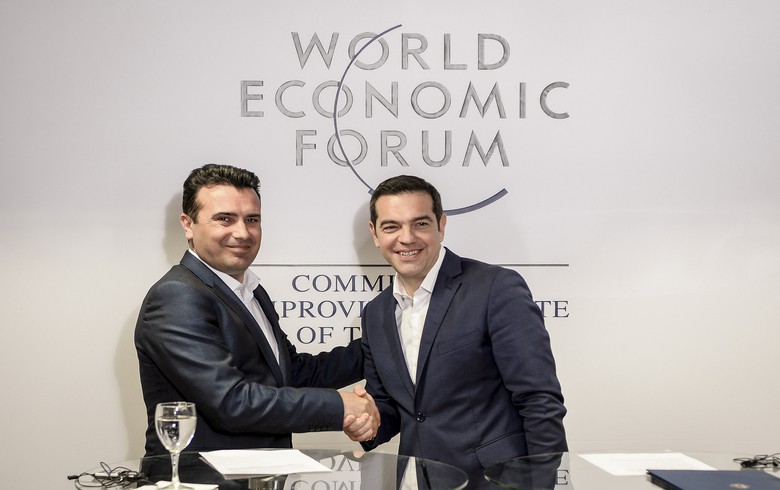 Zaev and Tsipras during their meeting; Source: Macedonian Government

SKOPJE (Macedonia), January 25 (SeeNews) - Macedonia's prime minister Zoran Zaev said the government plans to rename Skopje airport and the country's main motorway in a bid to improve relations with Greece soured by a dispute about the name of the former Yugoslav republic.

Skopje airport and Macedonia's main motorway are both named Alexander the Great.

"I believe that the government will change the name of the airport and the motorway. The new name of the motorway will be 'Friendship'," Zaev said in a video file posted on the YouTube channel of Macedonia's government on Wednesday.

Athens argues that the name Macedonia suggests that Skopje has territorial claims to Greece's northernmost province of the same name that goes back to the time when Alexander the Great ruled in the fourth century BC.

The solution of the name dispute between Macedonia and Greece has to respect the national dignity and interests of both peoples, Zaev said during a news conference following a meeting with Greek prime minister Alexis Tsipras at the World Economic Forum in Davos, Switzerland.

"Our actions show our good faith. This testifies to the fact that we have no territorial aspirations towards our neighbour. On their behalf, they will show their acts of good will and allow us to enhance our cooperation with the European Union and other international organisations," Zaev said.

Macedonia has been a candidate to join the European Union since 2005 but has not yet started accession talks. The dispute with Greece over the country's official name is considered the main obstacle to the launch of membership negotiations. In November, EU enlargement commissioner Johannes Hahn expressed hopes a political decision on the start of membership talks with Macedonia will be made in the first half of 2018.