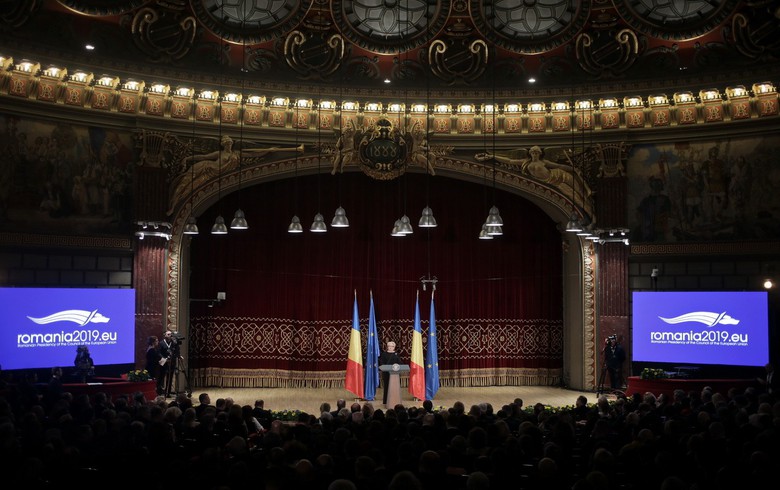 BUCHAREST (Romania), January 11 (SeeNews) - The European Union urged Romania to stick to its commitments to European values as the country officially assumed the rotating presidency of the Council of the EU on Thursday evening.

"What is at stake during the Romanian Presidency, as well as the informal European Council in Sibiu, is nothing less than the way we envisage our European future together," EU Council President Donald Tusk said during a ceremony that took place at the Romanian Athenaeum in Bucharest. "It depends only on you, whether, for Europe, Romanian politics will be a good example, or a dire warning."

Tusk also said: "To those in the European Union who might think that playing outside the agreed rules and cutting corners means strength, I say: you are wrong. It means weakness. To those working hard to defend European values, our freedoms and rights, I say: keep fighting."

The President of the European Commission Jean-Claude Juncker stressed the importance of Romania's fight against corruption.

"The road to Romania's accession has always been difficult and demanding. The EU does not compromise, even if it is human rights, the rule of law, the fight against corruption, there are no compromises. It is impossible to compromise, because Romania has its place in the EU," Juncker said.

In an attempt to put at ease some of the concerns regarding Romania's disregard for EU values, prime minister Viorica Dancila said that Romanians are and will remain a pro-European people.

"We have not changed our pro-European vision so far and we will not. We want to be equal respected partners in the EU," Dancila said during her speech.

Romania's EU presidency will last for six month, a time that the country must use in order to push a mutually beneficial agenda for all EU member states, the country's president Klaus Iohannis said.

"We all know that exercising the presidency is a mission of high responsibility, which involves both commitment and pragmatism to be able to respond in a concrete, appropriate and realistic way to all challenges. More unity and cohesion - this is the operational manner we are proposing for the next six months, and we will have to pursue it all with consistency," Iohannis said.

In November, Romania's European affairs minister Victor Negrescu, primarily responsible for ensuring Romania's successful EU presidency, resigned without giving a reason. Negrescu was replaced by George Ciamba, a career diplomat who has been working at the foreign affairs ministry since December 1990.

At the beginning of November, Klaus Iohannis said the government was not prepared for assuming the presidency of the Council of the EU, but a few days later he sounded more optimistic, saying that he thinks that "it can be done".

Starting 2017, when the government issued an emergency decree meant to ease penalties for corrupt officials, Romania has witnessed numerous street protests and has received multiple warnings from EU officials about the dangers of backtracking in its fight against corruption.