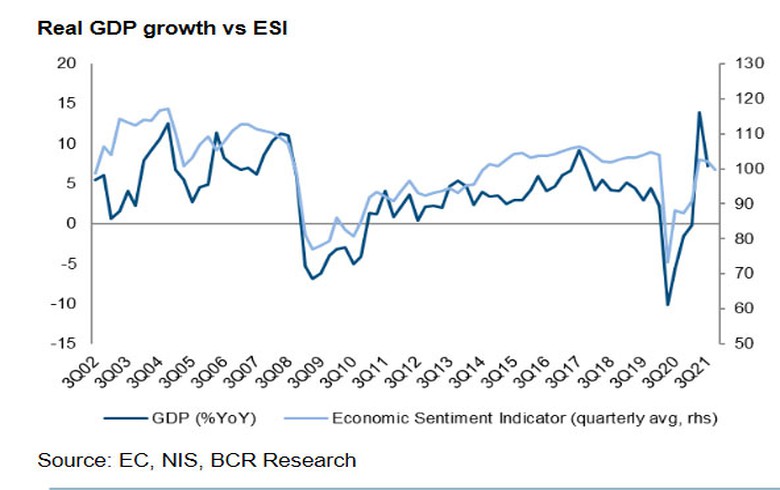 BUCHAREST (Romania), November 17 (SeeNews) - Erste Group analysts said they expect Romania's economy to grow by a real 6.4% in 2021, cutting their previous forecast for 7.4% economic expansion due to weaker than expected third-quarter figures.

"We also downgrade our 2022 GDP outlook to 4% y/y from 4.5% with downside risk as carry-over effect from the fourth quarter of this year is likely to weigh in as the economy seems to be in a soft patch," Erste said in an analysis on Tuesday, after Romania's statistical board released a flash estimate of the performance of the country's economy in the third quarter.

The analysts noted that the confidence indicators softened in the third quarter to 102.0 from 102.7 in the second quarter, while the Economic Sentiment Indicator (ESI) dropped further below its long-term average at the start of the fourth quarter.

Large fiscal impulse in the last quarter with 3.36pp of GDP net spending left to reach the budget deficit target for the whole year of 7.13% of GDP could save the day for the economy into the year-end and support economic growth into the first half of the next year, Erste analysts said, adding that nevertheless, carry-over effect is likely to weigh down 2022 GDP growth.

Romania's economic output increased by 7.2% year-on-year in the third quarter of 2021, compared to 5.6% contraction in the like quarter of 2020, non-adjusted flash data of the country's statistical board, INS, indicated on Tuesday.

Compared to the previous quarter, GDP edged up 0.3% in the third quarter of 2021.

Overall, in the first nine months of 2021 Romania's GDP rose by an annual non-adjusted 7.1% and by a seasonally-adjusted 6.8% year-on-year.

The country's economic output will increase by an estimated 7% in 2021, Romanian finance ministry analysts said in August, revising their previous forecast for 5% growth.