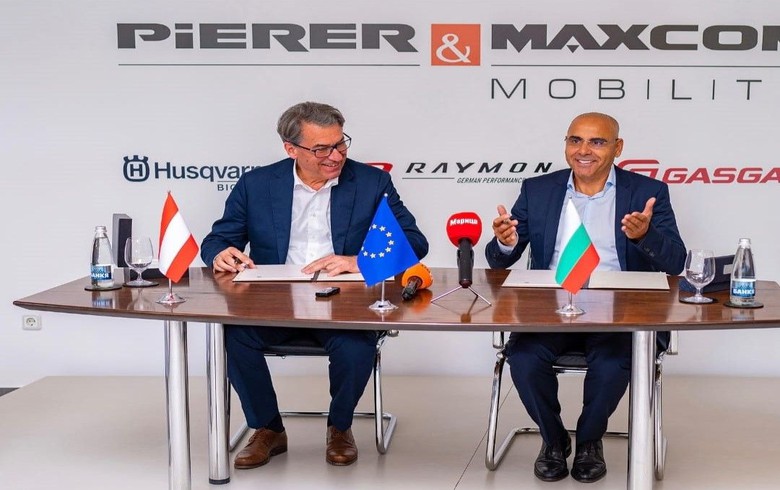 The plant will spread on 13.1 ha in Trakia Economic Zone (TMZ) near Bulgaria's second-largest city of Plovdiv and open 1,000 new jobs in the region, the economy ministry said in a statement on Wednesday.

Other types of two-wheeled electric vehicles besides electric bikes will also be manufactured at the new plant.

This investment creates an opportunity for Bulgaria to become leader in the respective sector in Europe, Bulgarian caretaker economy minister Kiril Petkov said in the statement.

Pierer Mobility Group said in a separate statement on Wednesday that it decided to form a joint venture with Maxcom wherein they each have a 50% interest. Maxcom is already a supplier of Pierer E-Bikes GmbH, part of the Pierer Group, the Austrian company said.

"The total investment volume is 40 million euro ($47.2 million). A state-of-the-art e-bike production facility is being built on an area of ​​130,000 sq m. International suppliers are also given the opportunity to set up production facilities on site," Pierer said.

According to Pierer, the commissioning of the plant is planned for the second half of 2023. The facility will have an annual production capacity of 350,000 pieces.

Plovdiv-based Maxcom started operations in 1996. In 2001, Maxcom's bikes were officially introduced in the EU and since then over 95% of the company's original equipment manufacturer (OEM) products are sold to European customers. The company has a 40,000 sq m plant with capacity to annually produce over 400,000 bicycles of different types. Maxcom has created two bike collections - Sprint and Shockblaze, which are available for B2C customers as well as for OEM partners with an option for customisation by their own specification, information published on the company's website showed.

Maxcom is a wholly-owned unit of local company Max Europe Ltd. which is in turn controlled by private individual Maxim Mitkov, according to data published in the Bulgarian commercial register,.

Pierer Mobility Group is specialised in the production of "powered two-wheelers" (PTW). With its motorcycle brands KTM, HUSQVARNA Motorcycles and GASGAS, it is one of the European technology and market leaders, especially for premium motorcycles, the company said in its statement.

In addition to powered two-wheelers equipped with combustion engines or innovative electric drives, Pierer's product portfolio also includes e-bicycles. The company's e-bicycle activities will be promoted under the brands HUSQVARNA E-Bicycles, R Raymon and GASGAS E-Bicycles in order to participate in the attractive market growth of the e-bicycle segment and to become a major international player, the company added.