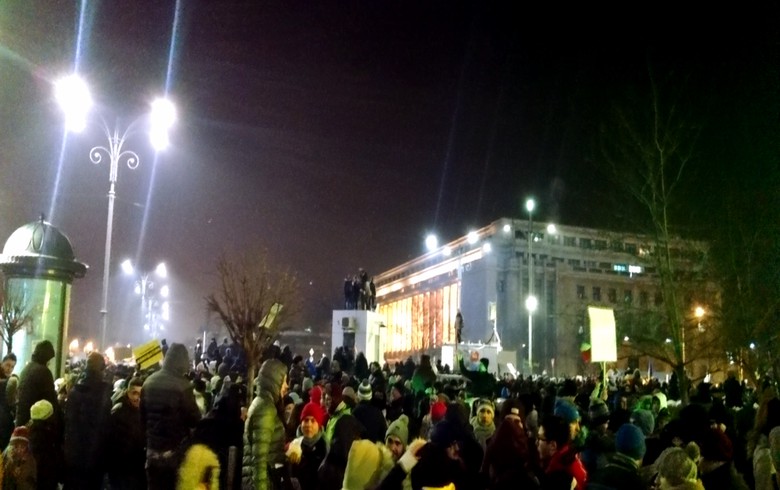 BUCHAREST (Romania), February 2 (SeeNews) - A record 300,000 people gathered on Wednesday in Bucharest and other Romanian cities in the biggest rallies since the fall of communism in 1989 to protest an emergency government decree that eases or scraps penalties for corruption offences.

Protesters see the decree as an attempt to weaken the fight against corruption and help politicians avoid criminal prosecution on graft charges.

An estimated 150,000 people protested in Bucharest only and a total of 150,000 marched through the streets of 50 other cities, according to the interior affairs ministry. Romanians living abroad also expressed their dissatisfaction with the government backtracking on the fight against corruption, holding protests in Paris, London, Brussels,Turin, Oslo, Copenhagen, Dublin and many others, Romanian media reported.

Protests in Piata Victoriei square in Bucharest were peaceful until 21.00 CET, when a group of football fans attacked riot police, forcing them to use teargas. The group, allegedly supporters of Romania's Dinamo football club, discussed their plans to infiltrate protest rallies in public posts on Facebook. As a result of the clashes, three football fans and two gendarmerie officers were taken to hospital, the interior ministry said. Some of the peaceful protesters who were affected by teargas also needed medical care.

Some 50 people who acted violently were arrested.

As a result of the protests, the technocrat minister responsible for business environment in the coalition government of left-wing Social Democrat Party (PSD) and centre-right Liberal-Democrat Alliance (ALDE), Florin Jianu, resigned on Thursday morning.

"I reflected with responsibility on what is ethical to do next [...] how I will look in the eyes of my child and what I will say to him over the years. I'll tell him - your father was a coward and endorsed actions that he does not believe in or has chosen not to get out with his head up from a story that is not his?! "Florin Jianu wrote on Facebook.

Earlier on Wednesday, some PSD members such as ex-minister delegate for social dialogue and the relationship with civil society in 2014, Aurelia Cristea, resigned from the party in disagreement over the decree which wil benefit corrupt politicians.

PSD is summoning all of its regional leaders in Bucharest on Thursday in order to discuss the heightened tensions in the country and decide whether the party will organize counter protests.

Opposition National Liberal Party (PNL) and Save Romania Union (USR) said on Wednesday they filed a censure motion against the government. PNL leader Raluca Turcan urged the other parties in parliament to leave it and thus trigger early elections.

Also on Wednesday, the country's national council of magistrates CSM challenged the decree in the Constitutional Court.

The European Commission expressed concern over Romania weakening its fight against corruption on Wednesday, as did the embassies of Belgium, Canada, France, Germany, the Netherlands and the United States in a joint statement.

The emergency decree, approved by the government at 21.00 CET on Tuesday and hastily published in the country's Official Gazette, decriminalises several offences and makes abuse of office punishable by jail terms only if that offence has resulted in a loss of more than 200,000 lei ($47,500/44,000 euro).

PSD leader Liviu Dragnea can potentially benefit from the new decree. Dragnea is currently on trial on charges of abuse of office that has led to a loss of 108,000 lei to the state. He also has a two-year suspended jail sentence for a referendum fraud in 2012, which prevented him from becoming prime minister.

Also, the government decided to send to parliament a draft pardon bill which, if adopted, will set free inmates serving sentences of up to five years for non-violent crimes including corruption. The government initially intended to grant the pardon by way of emergency decree.

The government led by prime minister Sorin Grindeanu unveiled the drafts of the emergency decree and the pardon bill on January 18.

Some 100,000 people protested on Sunday night in Bucharest after an estimated 48,000 people took part in protests a week earlier against what then were only plans of the government to pardon prisoners and decriminalise some offences. The government has said the measures were needed to cope with overcrowding in Romanian prisons.

Protests were still ongoing on Thursday at 09.00 CET in Piata Victoriei square, in front of the government building.

These are the most massive protests in Romania since the bloody overthrow of communist dictator Nicolae Ceusescu in December 1989. Also, a year ago, thousands marched in the streets after a fire in a night club in Bucharest claimed 64 lives. Back then, former PSD leader Victor Ponta resigned as prime minister under public pressure and was replaced by technocrat Dacian Ciolos.